With Payless ShoeSource set to close all of its U.S. stores by the end of May, two discount footwear chains could gain sales in the coming year.

Just a year and a half after exiting bankruptcy with high hopes for a comeback, discount shoe giant Payless ShoeSource is calling it quits. The struggling retailer announced last week that it will close all of its more than 2,000 remaining company-owned stores in the U.S. over the next few months.

The impending disappearance of Payless ShoeSource from the U.S. retail landscape represents an opportunity for rivals to snap up its customers. The two biggest winners are likely to be DSW (DBI 0.46%) and Caleres (CAL -2.77%).

Payless has struggled, but it's still a big name in shoes

Two years ago, Payless blamed its initial bankruptcy filing in large part on outdated inventory management systems. The company purchased too much merchandise in early 2015 -- much of which arrived late, due to a West Coast port strike.

The resulting inventory glut forced Payless to take huge markdowns, wrecking its margins. Meanwhile, a heavy debt load left it with little room to maneuver. However, the company was able to shed much of its debt during its 2017 restructuring, and planned to update its inventory management systems after emerging from bankruptcy.

Unfortunately, Payless' problems ran a little deeper than inventory management problems. For one thing, the footwear market is highly fragmented and extremely competitive. Additionally, mall traffic has been falling for years, weighing on in-store sales. Payless' bankruptcy restructuring bought it some time, but not enough time to address these thorny issues. 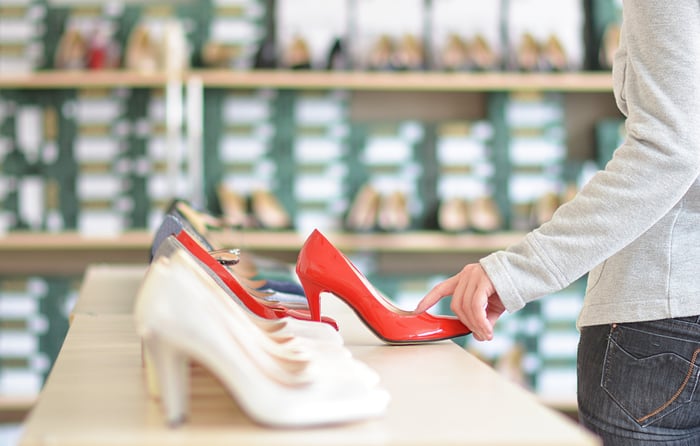 Still, Payless had around $2.3 billion of revenue in 2016 and kept most of its stores open after its original bankruptcy filing. Thus, there's a substantial revenue opportunity for rivals to fight over.

DSW is making the right moves

Resurgent off-price shoe giant DSW has a chance to take a sizable chunk of Payless' business. DSW itself was struggling with sluggish sales a couple of years ago, but it returned to comp sales growth in 2017 and its growth rate accelerated in 2018.

DSW's self-service, off-price business model should appeal to bargain-hunting Payless customers. Moreover, DSW is addressing its biggest historical weakness: the lack of a robust kids' offering. The company introduced children's sections into nearly half of its stores several years ago and has been expanding that business aggressively. This will help it target young parents, a key demographic for Payless ShoeSource.

DSW is on track to end fiscal 2018 with a little over $3 billion in annual revenue, so it is still small enough that taking a significant chunk of Payless' market share could have a meaningful impact on its revenue and earnings growth.

The parent of Famous Footwear could also profit

Caleres is also well positioned to benefit from Payless' demise. While the company makes shoes under a number of midrange-to-upscale brands, including Naturalizer and Allen Edmonds, it generates the majority of its revenue -- $1.6 billion out of a total of $2.8 billion in fiscal 2017 -- from its Famous Footwear chain.

Famous Footwear has more of a focus on name-brand athletic shoes than Payless (or DSW, for that matter), but it still has plenty of overlap with Payless in terms of styles and price points. It has an even broader store footprint than DSW, with roughly 1,000 U.S. locations. It also already has a robust kids' offering: Caleres gets about 9% of its revenue from children's shoes, and that percentage is probably significantly higher for the Famous Footwear chain itself.

While Famous Footwear doesn't have quite the same sales momentum as DSW, it was on track to post low-single-digit comp sales growth in fiscal 2018 as of last November. And after closing some underperforming locations last year, it has a more productive store base.

DSW and Caleres' Famous Footwear chain will be just two of many chains looking to gain market share as the last Payless ShoeSource stores close a few months from now. But their common focus on selling discounted shoes in a self-serve "open-sell" format should make DSW and Famous Footwear go-to shoe stores for many former Payless customers.