Canopy Growth's CEO and CFO talk cannabis-infused beverages, when the company's hemp-derived CBD products could be available in the U.S., and more.

Net revenue soared 282% year over year to 83 million Canadian dollars, driven by the opening of Canada's recreational marijuana market in mid-October. Sales to this new market accounted for about CA$59 million, or 71% of total net revenue; sales to medical patients, primarily in Canada, but also in international markets, notably Germany, brought in $16.5 million, or 20% of net revenue; and sales of devices, merchandise, and clinic services generated CA$7.5 million, or 9% of net revenue. Breaking out by product type, oils accounted for 33% of product revenue, up from 23% in the year-ago quarter. This shift in product mix is a positive since oils generate higher gross margins.

The profit picture wasn't nearly as pretty because Canopy is investing heavily in growth initiatives, thanks largely to the $4 billion it received last fall when alcoholic beverage giant Constellation Beverages brought its ownership stake in Canopy up to 38%. Canopy's net income jumped 581% to CA$74.9 million, or CA$0.22 per basic share. However, the positive net income is only because of the changes in fair value from the company's financial assets and financial liabilities. Canopy had an operating loss of CA$157.2 million and a loss per fully diluted share of $0.38.

Earnings releases only tell part of the story. Here are three things from Canopy Growth's fiscal Q3 call that you should know. (Transcript via Seeking Alpha.) 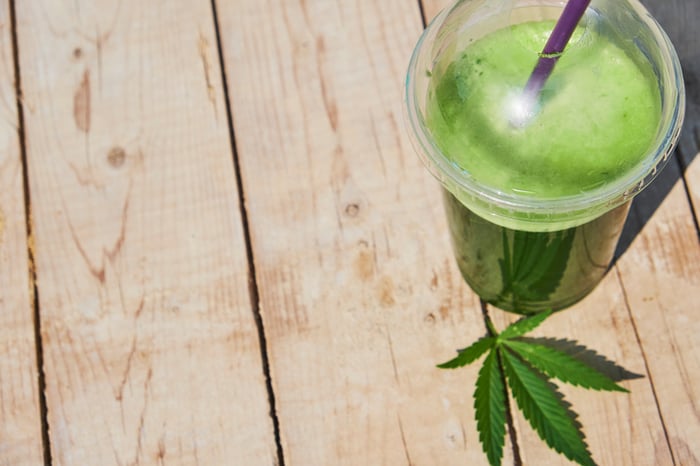 We have a building that's a little bit more than 150,000 square feet which is being put up right now... The building is expected to be complete May 1, which means that we can then begin to put all of the equipment inside so that we can then begin to make the beverages, which will use the science that we've been creating for four years to go into brand extensions of Tweed and a bunch [of brands] that are behind the curtain [not being revealed yet] that I think... consumers will love.

Cannabis-infused beverages, along with edibles, aren't yet legal in Canada, but they're widely expected to get the regulatory green light this year. It seems that Canopy Growth will be ready to start pumping out these beverages as soon as it's legally permitted to do so. These beverages are expected to have higher gross margins than the cannabis products Canopy is now legally permitted to sell -- dry flower and oils -- so they should help boost the company's overall gross margin.

Hemp-derived CBD products targeted for commercial availability in the U.S. by calendar Q4 2019

The following quote is from Linton's remarks to an analyst who asked if management still believed that Canopy would have hemp-derived cannabidiol (CBD) products commercially available in the U.S. by the fourth quarter of this year, as Linton said he believed would be the case when he spoke at a stock analyst event in December. (CBD, which can be extracted from both marijuana and hemp, is a nonpsychoactive chemical that's been associated with a host of medicinal benefits.)

I think we're still on a track ... to have products in the [U.S.] markets where they're permissible. So maybe New York State will be a terrific market. Perhaps California will be a tougher one and that's more about regulation. But we're on track with acquiring the building, having third-party growers, having processing [operations], and whether or not it's Q4 [2019], Q1 [2020] ... [is] a function of a few things having to go right.

For background, on Jan. 14, Canopy Growth announced that it received a license from New York State to process and produce products derived from hemp. This move into the U.S. cannabis market was made possible by the U.S. Farm Bill, which became effective on Jan. 1, 2019. This legislation "removed industrial hemp from the federal government's list of controlled substances, making it legal across the country to grow and process it and opening up a potentially massive market for hemp-derived CBD products," as I wrote earlier this month.

I've made the decision to retire from the CFO role at Canopy later this calendar year... I really believe now is an appropriate time to hand the reigns over to a new financial executive to shape and drive financial capabilities over the next three to five years as the country prepares for its next phase of growth.

The departure of a CFO can sometimes be a bad sign, but there doesn't appear to be anything worrisome here. Saunders seems to be leaving his position on good terms, as he'll reportedly be staying on in a strategic advisor role. He said that top management expects his successor to be "named in the coming months." It's fairly common for a company's CFO to change at the stage Canopy Growth is now in, with revenue growth just starting to explode.

In short, 2019 promises to be another exciting year for Canopy, with the company beginning operations in the U.S. this year, and anticipating rolling out new, higher-margin products beginning later this year.