The Galaxy's Edge expansion will open on May 31 in Disneyland and Aug. 29 in Disney World, but one of the two rides will open later.

When Walt Disney (DIS -0.70%) CFO Christine McCarthy announced that Star Wars: Galaxy's Edge -- the ambitious 14-acre expansion at Disneyland in California and Disney's Hollywood Studios in Florida -- would open "later in the fiscal year" during last month's earnings call, it was widely believed that she misspoke. Disney's fiscal year ends in September, and all indications before that pointed to an opening in October -- if not November -- at Disney World.

But McCarthy was right all along. Disney revealed during Thursday morning's annual shareholder meeting that Star Wars: Galaxy's Edge will open at Disneyland on May 31 and Disney World on Aug. 29. The announcement didn't have much impact on the shares, though it should provide a bump to Disney's financial results through the next two quarters. 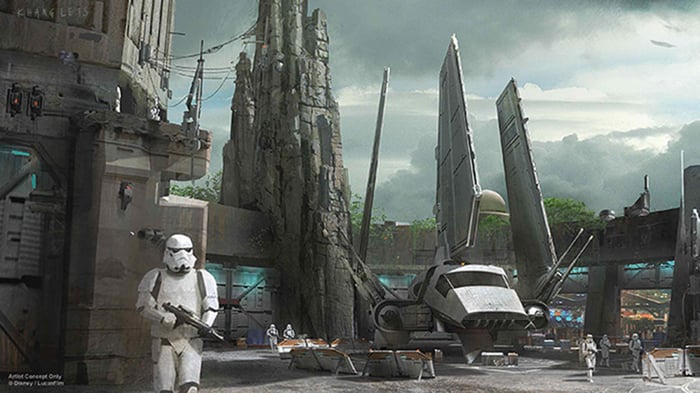 What you might expect to see at Star Wars: Galaxy's Edge. Image source: Disney.

Opening sooner rather than later is welcome news for both shareholders and Star Wars fans, but an important distinction is that the entire experience won't be ready by the expansion's launch. Rise of the Resistance -- one of the two bar-raising rides in Star Wars: Galaxy's Edge -- will open at a later date. In short, Star Wars: Galaxy's Edge will technically be opening in two phases.

One of the benefits of opening the two signature rides weeks -- or more likely months -- apart is that it should spread out the crowds. Disneyland and Disney's Hollywood Studios will be packed with visitors anyway, but a lot of folks planning to be at the opening may now decide to hold off until the entire expansion is available a few months later. A trip to a Disney theme park isn't cheap, and obviously two trips would be even more expensive.

Disney is also taking another step to regulate crowds, at least at Disneyland's springtime launch. It will require advance reservations to visit Star Wars: Galaxy's Edge through at least June 23. Visitors will need regular park admission tickets to make the no-cost reservations, though guests staying at any of the resort's three on-site hotels will have access to the themed expansion.

Another strategy to keep crowds in check is that Disney won't make FastPass+ in Florida and MaxPass in California initially available on Millennium Falcon: Smugglers Run, the lone ride that will be available at the grand openings. The financial risk here is that guests who typically stay at one of Disney World's resorts in order to receive access to FastPass+ reservations ahead of annual pass holders and day guests may decide to stay off site, but Disney will make Star Wars: Galaxy's Edge available to on-site resort patrons an hour before it opens to day guests.

Disney's theme parks business has been its most consistent segment in recent years, so having the Lucasfilm-inspired section open during the late spring in Disneyland and late summer in Disney World is important. Fiscal 2019 just became that much more out of this world for Star Wars fans and Disney shareholders.