A weak jobs report added to market woes Friday, but stocks cut their losses late in the session. The Dow Jones Industrial Average (DJINDICES:^DJI) and the S&P 500 (SNPINDEX:^GSPC) ended their worst week of 2019 on the 10th anniversary of the bull market. 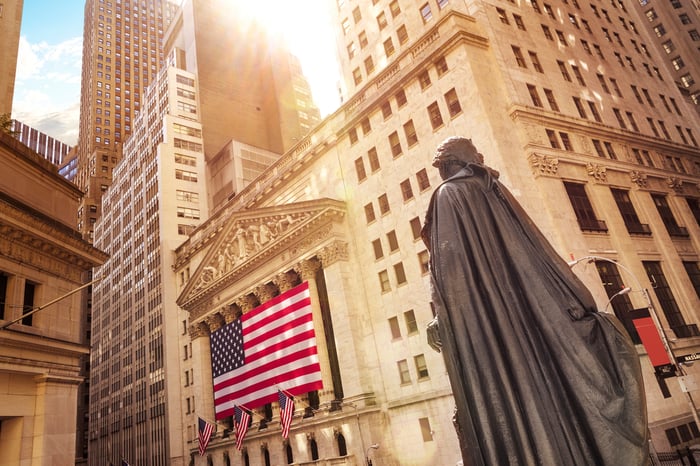 Shares of National Beverage, maker of LaCroix sparkling water, tumbled 14.7% after the company reported declining sales and profit that missed analysts' expectations by a mile. Net sales fell 2.9% to $221 million and earnings per share plunged 40% to $0.53. Analysts were expecting the company to earn $0.76 on sales of $237 million, partly based on optimistic statements the company made last quarter. Case volumes of National Beverage's Power+ brands declined 5.8%, which it blamed on media coverage of litigation regarding LaCroix.

Adding weirdness to the news was an odd statement by CEO Nick Caporella, who said in the press release, "We are truly sorry for these results stated above. Negligence nor mismanagement nor woeful acts of God were not the reasons -- much of this was the result of injustice!" He also compared managing a brand to caring for the "handicapped."

Caporella's comment about "injustice" was likely referring to a lawsuit that disputes the company's claim that LaCroix is made with only "natural" ingredients, an allegation that the CEO previously attributed to "professional liars."

Check out the latest earnings call transcripts for Costco and other companies we cover.

Warehouse retailer Costco beat profit expectations in its fiscal second quarter as investor concerns about margin pressure didn't materialize, and shares rose 5.1%. Revenue grew 7.3% to $35.4 billion, a bit less than the $35.7 billion analysts were expecting, but earnings per share of $2.01 blew past the analyst consensus estimate of $1.70.

Comparable sales in Q2 grew 5.4% for the company and 7.4% in the U.S. Excluding the effects of gasoline prices, currency exchange, and an accounting change, comparable sales increased 6.7%. Membership fees rose 7.3% to $768 million, a deceleration from 9.5% growth last quarter, as the effect of a price increase in 2017 tapers off. E-commerce sales grew 20.2%.

Last quarter, Costco's stock plunged when the company reported lower gross margin in its core merchandise, attributed to competition in fresh food. In Q2, analysts were surprised to hear that core gross margin actually improved slightly, and total gross margin improved sequentially from 10.7% to 11.3%, contributing to the beat on the bottom line.