The liquid biopsy leader continues to expand at a rapid pace, and management expects more of the same in 2019.

Revenue grew 64% during the quarter as demand for its Guardant360 and GuardantOMNI product lines continues to take off. The picture wasn't as rosy on the bottom line, but that is a direct result of management investing heavily in its commercial team, as well as research and development programs.

What happened with Guardant Health this quarter? 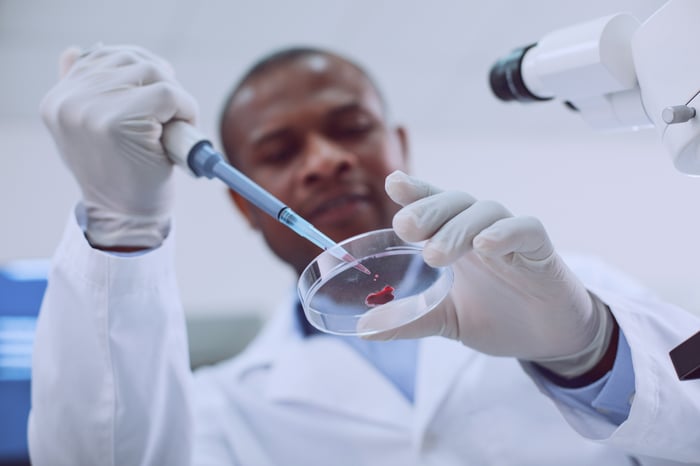 Here's how the company's numbers shook out for full-year 2018:

CEO Helmy Eltoukhy succinctly summarized the progress made during the year:

During 2018, we made important headway on key initiatives and are continuing to see strong adoption of our liquid biopsy platform, which has driven increased revenue of more than 80 percent over the prior year. We believe the recent NILE readout is an important catalyst supporting a blood-first paradigm for first-line use of Guardant360 testing for treatment selection ahead of tissue testing, offering lung cancer patients improved care with a faster time to treatment.

Eltoukhy commented on the company's decision to invest heavily in the development of its LUNAR clinical studies. These trials promise to open up Guardant's liquid biopsies to millions of cancer survivors and people who could benefit from regular cancer screenings.

He said, "In addition, we are encouraged by the progress we are making with our LUNAR program and look forward to presenting pilot LUNAR data at the AACR conference next month. As a result of these developments, we are ramping up investment to accelerate our research and development efforts toward earlier cancer detection."

Management expects that Guardant's rapid pace of growth will continue into 2019. The company is currently forecasting that full-year revenue will land between $130 million and $135 million, which would represent growth between 43% and 49%.

The good news is that Guardant ended the year with nearly $500 million in cash, so it should have no problems funding the expected loss without needing to tap shareholders for cash.