Please ensure Javascript is enabled for purposes of website accessibility
Log In Help Join The Motley Fool
Free Article Join Over 1 Million Premium Members And Get More In-Depth Stock Guidance and Research
By Dan Caplinger – Updated Apr 14, 2019 at 10:13AM

Ask the average person whether the Dow Jones Industrial Average has risen or fallen over the past month, and you won't necessarily get more than a guess. But nearly everyone knows what's happening at the gas pump, and lately, prices have been surging.

The move comes shortly after a nearly $0.70-per-gallon plunge in unleaded gasoline prices, sending the fuel's cost to its lowest level since 2016. Yet in just the past five weeks, gas has seen a bounce of $0.22 per gallon, according to the latest data from the U.S. Energy Information Administration. 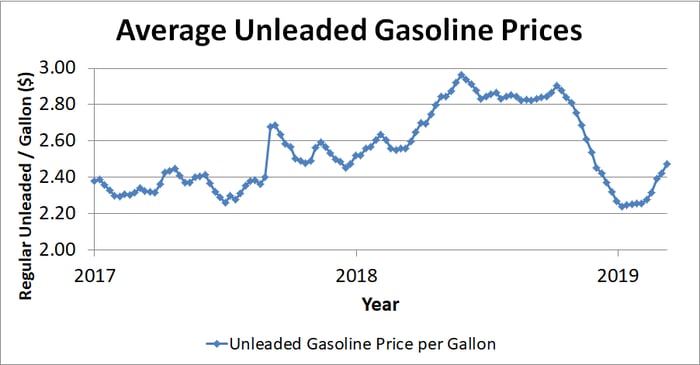 Most experts attribute the move higher to the end of a glut in supply during the winter months. It's not unusual for gasoline prices to rise during the spring months as the energy markets anticipate the greater demand from summer driving. Yet March is a bit early for that seasonal impact to start showing up, and there are other factors at play.

Looking ahead, a number of those factors could push prices at the pump even higher. OPEC nations have tried to implement production curbs to limit supply, and the political and economic strife that Venezuela is enduring has had a measurable impact on global energy markets. After several years of weak oil prices, exploration and production companies in the U.S. and elsewhere have cut back on how much they're spending to drill new wells, further threatening future supply. And finally, consumers' appetite for larger, less fuel-efficient vehicles has continued, and that could exacerbate any future supply crunch.

That in turn could affect the overall economy. Weak gasoline prices have played a huge role in keeping inflation in check, giving the Federal Reserve the latitude to be more cautious in boosting interest rates. If prices at the pump bounce back sharply, then it could create a big surge in inflation -- at just the time consumers have less disposable income left to spend on other goods and services. That one-two punch won't necessarily push the U.S. economy into a full-blown recession, but it could still pose problems in an economic situation that looks increasingly vulnerable to a potential downturn.

Why Shares of Sandstorm Gold Are Falling Today