Williams-Sonoma (WSM -1.62%) announced fiscal fourth-quarter 2018 results on Wednesday after the market closed. The home-furnishings retailer not only highlighted better-than-expected growth during the crucial holiday quarter, but also raised its dividend and announced a large new stock repurchase authorization.

With shares up modestly in after-hours trading as of this writing, let's take a closer look at how Williams-Sonoma ended the year, as well as how the company set the stage for the quarters ahead. 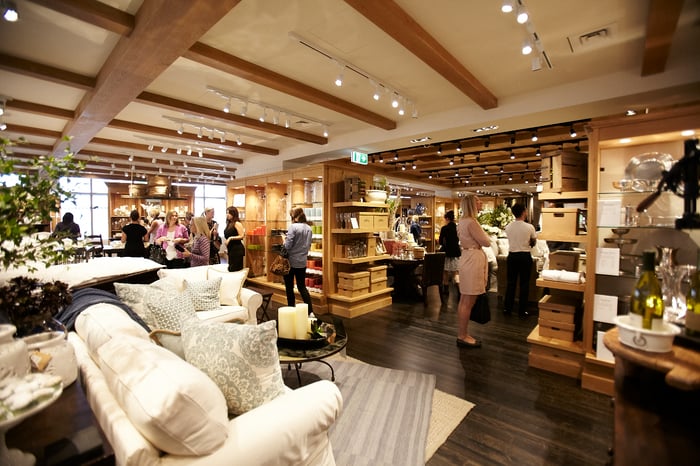 Check out the latest earnings call transcript for Williams-Sonoma.

2018 was a strong year for our business. We outperformed revenue and EPS expectations while making important investments in our business that set us up for accelerated long-term growth. [...] For 2019 and beyond, our goal is to maximize growth and maintain high profitability, and we have several substantial growth engines that we will be aggressively prioritizing, including West Elm, our newly launched Business to Business offering, our emerging brands -- Williams Sonoma Home, Rejuvenation and Mark and Graham -- as well as growth in our largest brand Pottery Barn and our namesake brand Williams Sonoma. In addition to our brands, we have a number of cross-brand initiatives, including The Key, which we believe will also be significant drivers of our future growth.

From now on, Williams-Sonoma will only be offering guidance on an annual basis, with any relevant updates provided on a quarterly basis.

It expects full fiscal-year 2019 revenue ranging from $5.67 billion to $5.84 billion (up from $5.67 billion in fiscal 2018), assuming a net of 30 store closures and comparable-brand revenue growth of 2% to 5%. On the bottom line, that should translate to adjusted earnings per share of $4.50 to $4.70. By comparison -- and while we don't typically lend much credence to Wall Street's demands -- most analysts were modeling lower fiscal 2019 earnings of $4.44 per share on revenue just below the midpoint of Williams-Sonoma's guidance range.

All told, this was as strong a quarter as any Williams-Sonoma investor could have hoped in the all-important holiday season. Coupled with the company's optimistic outlook, I think the market has every justification to bid up Williams-Sonoma stock in response today.