Uniform and workwear manufacturer UniFirst (UNF -0.29%) achieved mid-single-digit revenue growth in its fiscal second quarter of 2019 (the three months ended Feb. 23, 2019). Within its earnings report, which was released on Wednesday, the company also positively recast its full-year earnings projection. Below, we'll review relevant highlights of the quarter, as well as management's new outlook. Note that all comparative numbers are presented against the prior-year quarter. 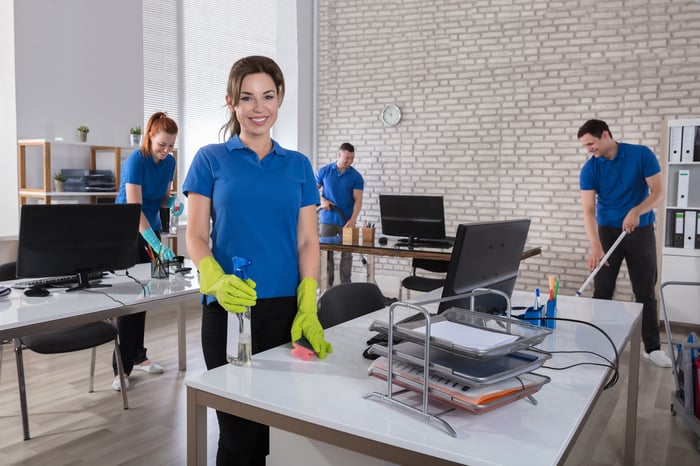 What happened with UniFirst this quarter?

Revenue in the company's core laundry segment rose 4.1% to $394.4 million, while the specialty garments segment (which sells products for nuclear decontamination and cleanroom operations) expanded its top line by 10.1% to $29.7 million.

Operating income improved by $20.5 million to $62.5 million. However, this was mostly attributable to a pre-tax gain of $21.1 million, which arose from a settlement the company received from the lead contractor responsible for upgrading UniFirst's customer relationship management (CRM) system.

In fiscal 2017, UniFirst was forced to record a $55.8 million impairment charge due to problems with the CRM system. The resolution agreed to this quarter included a $13 million cash settlement, the receipt of hardware and maintenance from the contractor, and the forgiveness of certain outstanding amounts still owed by UniFirst.

Removing the effects of the settlement, UniFirst's operating margin fell by 50 basis points to 9.5%. Management attributed the decline primarily to increased production and service payroll costs, as well as higher merchandise amortization. These factors were partially offset by a lower level of healthcare claims, as well as the effects of the adoption of a new accounting standard, ASC 606, on the characterization of commission costs.

While UniFirst benefited from the settlement in the form of higher operating income, income tax effects produced the decline in net earnings shown in the table above. In the second quarter of fiscal 2018, UniFirst recorded an income tax benefit of $14.8 million as a result of U.S. tax legislation. In the current quarter, the organization booked $15.8 million in tax expense, creating a $30.6 million swing in tax expense between the two periods.

As for shareholder-oriented actions, UniFirst repurchased its own shares for the first time in the fiscal year during the last three months. The company acquired 45,000 shares on the open market at a total cost of $6.28 million.

Check out the latest earnings call transcript for UniFirst.

At this time, we now expect our fiscal 2019 revenues will be between $1.785 billion and $1.795 billion. Based on better than expected results to date as well as the inclusion of the CRM Settlement we now expect full year diluted earnings per share to be between $7.65 and $7.90. This guidance for fiscal 2019 assumes no future share repurchases and includes one extra week of operations compared to fiscal 2018 due to the timing of our fiscal calendar.

The revisions above were warmly received by investors -- UniFirst stock gained more than 8% in the trading session following the earnings release. While the company's full-year revenue estimate increased just 1% at the midpoint of the range versus prior projections, earnings per share now exceed management's prior expectations by 15%. Of course, as Sintros mentions above, the higher earnings include the CRM settlement gain and the benefit of an extra week in fiscal 2019.

Shareholders were likely pleased that while much of the revision is due to factors that are already baked in, management expects a steady couple of quarters to round out the fiscal year. Such stability may help UniFirst recover more of the 13% share-price loss it experienced in 2018. The stock has now gained roughly 5.5% year to date.