Please ensure Javascript is enabled for purposes of website accessibility
Log In Help Join The Motley Fool
Free Article Join Over 1 Million Premium Members And Get More In-Depth Stock Guidance and Research
By Motley Fool Staff – Updated Apr 2, 2019 at 8:23AM

Is it partly cloudy or somewhat sunny?

Are you overweight or under-height for your body mass?

Did a company miss on its earnings forecast, or did it experience "unexpected headwinds due to worse-than-expected seasonal weather with encouraging sales trends to close the quarter?"

Each of these examples reflects reality of a sort -- and many public companies consider reality, well, relative, when it's time to report quarterly results. 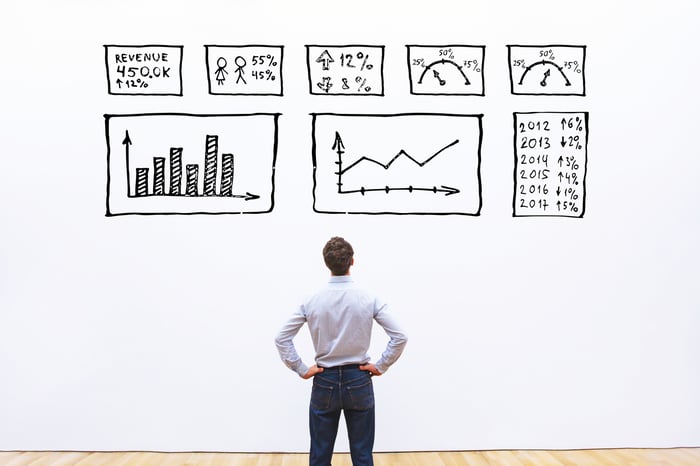 Legally, they all have to share some standardized numbers according to GAAP (generally accepted accounting principles). Even those can get tricky and require an investor's best judgment.

But it's the non-GAAP metrics -- the ones that include all kinds of adjustments, ranging anywhere from "super helpful in giving you business context" to "dubious" to "borderline deceitful" -- that really bear watching.

As Warren Buffett has explained:

... It has become common for managers to tell their owners to ignore certain expense items that are all too real. 'Stock-based compensation' is the most egregious example. The very name says it all: 'compensation.' If compensation isn't an expense, what is it? And, if real and recurring expenses don't belong in the calculation of earnings, where in the world do they belong?

For 364 days of the year, we do our best to help individual investors make sense of Wall Street jargon and put outlandish numbers into context. But on this hallowed day, we're taking a break and rolling with it.

Here are some modest proposals ...

EARROC (Earnings Assuming Rihanna Returns Our Calls): Some markets are so new and unproven that a company can only get attention for its efforts by pairing up with someone really famous. A start-up that turns excess metal hangers from the dry cleaners into clean energy sounds preposterous, but if Bruno Mars or Justin Bieber joins the board, maybe it's actually a good idea?

RWWRHF (Revenue We Worked Really Hard For): You've heard of sweat equity. This is kinda sorta like that. It lets a company finally put a subjective number on the value of hustle. Can be used really creatively in conjunction with SWAM (Sales We Almost Made), RATFACE (Returns After Taking Fake Allowances, Charges, and Expenses), and GOAP (Generally Objectionable Accounting Principles).

For the Cannabis Set

WEED (Wastage-adjusted Earnings at the End of the Day): A metric of net profit at marijuana dispensaries after accounting for use of products by store employees.

VARP (Value Above Replacement Player): There's a lot of hand-wringing about overpaid CEOs. The absolute dollar figures these folks make are hard to comprehend for 99% of us. On the other hand, what should a founder/CEO who created something from nothing be fairly paid? What about the CEO who came in and saved a soon-to-be-bankrupt company? Or the one who can manage a 50,000-person organization better than you or I could manage our beer-league softball team?

Unfortunately, we've got no easy mathematical formula for this one. We may have to rely on more of a ballpark estimate with TBR (Tweets Below Replacement).

Batting Average: A Hall of Fame baseball player only has to get three hits every 10 times at bat. A 70% miss rate sets expectations nice and low for cagey CEOs.

Plate Discipline: For the CEO who does nothing.

CWPASTITP (Customers Who Posted About Shopping There in the Past): For when your Throwback Thursdays > Black Fridays.

SIADE (Sales If Amazon Didn't Exist): A metric for retailers whose management believes the online leader may still be just a passing fad. Meanwhile, those in the "If you can't beat 'em, join 'em" camp might consider reporting on BISBOA (Browsed in Store, Bought on Amazon) and/or BOUOSFCS (Bought Online, Used Our Store for Customer Service).

The BOTS Lever (Better Off Than Sears): Break in case of emergency!

SOTD (Sales in Old-Timey Dollars). Sure, a company's numbers look terrible, but if it had these sales in 1920, it would be doing great!

SOILED (Sales On Inventory Left at the End of the Day): What if a huge order for all your inventory comes in after hours? It could happen, so expect it and state the revenue. See also: WAIF: (Wealth After Insurance Fire).

FYRE (Fake Yearly Revenue Expectations): Who says guidance needs to be based on past history? That's how pessimists do it...

PLUG Ratio (Price-to-Loss-to-Unattainable-Growth): So you've got no earnings, haven't had any in the past, and aren't going to generate any in the next few years. Meanwhile, even your investors are doubting your dreams. Time to crank up those top-line growth estimates and enhance your PLUG!

PIVOT (Potentially Internet-Viable Outlandish Things): Here in the Valley, we value optionality. Every entrepreneur hits roadblocks ... after all, who could have predicted that the 1,000th-best bitcoin alternative wouldn't have reached a trillion dollars by now? Or that it would be hard to disrupt a government-controlled industry in a country you've never set foot in?

Successful entrepreneurs shake off their missteps and seek the next big thing.

Measured in pure volume, your PIVOT score is simply the number of ideas you have in sexy growth industries you may not have heard of until recently. No track record needed, but you may want to get a referral from SAM ...

SAM (Size to Addressable Market): If you're an aspiring Unicorn, it can be advantageous to show what you'd be worth if you gained a small share of a huge market. To wit: "If my cupcake-in-a-jar business captures just 0.5% of the snack-cake market, I'll be a billionaire."

EBITDUH (Earnings Before Interest, Taxes, Depreciation, and Unoptimized Humans): Adjusts now for a future that includes an all-automated staff that works from home.

Metrics for the Discerning Investor

IG Ratio (Influencer Glorification): Measures dollars spent on influencers divided by real-world value created. Be careful -- like with the P/E ratio, you get some funny numbers as the denominator approaches zero. (This can also show a company whether it's better off paying Kendall Jenner or Grumpy Cat.)

Scorecard Turnover Rate: The number of times per year a company's management team shuttles among metrics to shop for the numbers that make them look best.

Ultimate bonus points for creating new metrics on the fly ... especially if they're more absurd than the ones above.