Find out how these companies have positioned themselves for bigger gains.

That's why we reached out to a few Motley Fool contributors for their recommendations for high-growth stocks that still have a lot of potential to keep growing. They came back with Genomic Health (GHDX), Shopify (SHOP 1.43%), and Okta (OKTA -3.02%). Here's why. 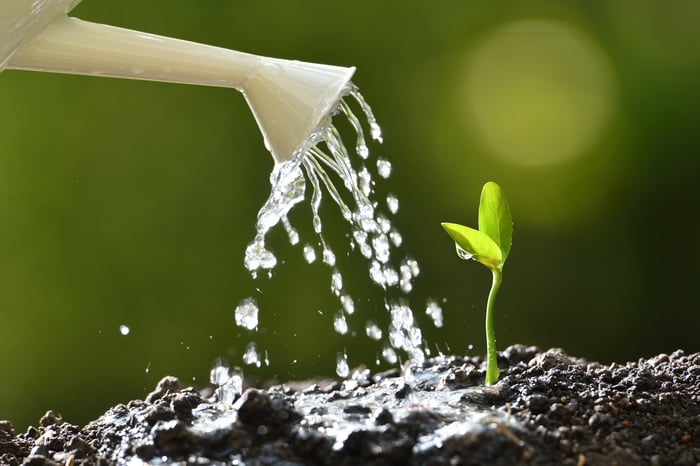 All set to exploit a massive addressable market

Neha Chamaria (Shopify): Shopify has been the poster boy for growth stocks with its shares gaining more than 700% since listing in mid-2015. Shopify tried to fill a gap in the high-potential e-commerce industry by providing a platform to small- and- medium-sized businesses to sell goods online, and there's been no looking back since: Shopify currently has more than 800,000 merchants from across 175 countries selling their products on its platform. The company's revenue crossed $1 billion in fiscal 2018, jumping 59% from 2017. Revenue from both sources -- subscriptions and merchant solutions (which includes solutions like Shopify Shipping, Shopify Payments, and Shopify Capital) -- grew double-digit percentages in 2018.

It's not tough to see why Shopify has been a success so far. Small businesses and entrepreneurs didn't have a go-to portal to set up an online shop, customize, and sell globally before this company stepped in. That Shopify is also consistently innovating and striving to integrate advanced technologies into its business to improve merchant and consumer experience acts as a cherry on top.

Yes, Shopify's stock will be volatile. And yes, it could even give up gains from its seemingly lofty current price point, especially if sales were to slow down, as critics fear. Yet, I see a winner in Shopify in the long run as I believe the company should be able to grow sales in the double-digits year after year as more merchants sign up on its platform. With Shopify also moving into massive markets that have just gotten started, like the Canadian cannabis industry, there's no limit to the kind of surprises the company could deliver in the coming years. If you have a long-term time horizon, Shopify is a promising growth stock that may have just started its run.

Maxx Chatsko (Genomic Health): After spending years pouring capital into scaling its technology platform, Genomic Health finally turned profitable in 2018. The business delivered year-over-year revenue growth of 16% last year, which helped it to post an operating profit of roughly $24 million, compared to an operating loss of $6.4 million in 2017. Net income soared to $25.6 million, up from a loss of $3.8 million the year before.

It's just getting started. Genomic Health issued full-year 2019 guidance that calls for revenue growth of 11% to 14% year over year and net income of $51 million at the midpoint. That will provide an advantageous level of financial flexibility that's unmatched by peers in the genetic testing space. That shouldn't be overlooked by investors.

Consider that the genetic testing industry remains highly fragmented, which means there are plenty of acquisition opportunities available. Genomic Health had $209 million in cash, cash equivalents, and marketable securities at the end of 2018, and it's poised to deliver another record year of operating cash flow after posting $76 million last year. With no debt and soaring profitability, investors might not be surprised if the company makes an acquisition or two in the near future to expand its technology platform and bolster its already-impressive growth.

Chris Neiger (Okta): Don't worry if Okta hasn't been on your radar until now. The company may not be in the most exciting tech field -- identity access management -- but it's an important (and lucrative) one.

Okta's services allow companies to assign login credentials to their employees or users, making it easy for them to grant specific permissions to some people while withholding access to others. This gatekeeper role not only helps users easily have access to the files and information they need, but it also protects valuable company information from falling into the wrong hands.

As companies add more of their information to cloud-based services, Okta makes it easy for them to manage their users as they grow. And the market is growing along with it. Grand View Research estimates that this identity and access management (IAM) market will grow into $22.7 billion industry by 2025. And Okta's business is already seeing tremendous growth. Sales were up by 50% in the most recent quarter, and Okta now boasts 6,100 customers, up 40% from the year-ago quarter.

Okta's share price has skyrocketed a staggering 138% over the past year, and there's likely a lot more room for it to grow. As companies continue to use cloud-based services, they're going to need to issue top-notch login credentials to users to make it all work. With Okta already leading the market with its tech -- and growing like a weed -- investors should take notice of this company now.