Wednesday was a down day on Wall Street, with earnings season continuing to produce both winners and losers. Given that the S&P 500 and the Nasdaq Composite both hit record highs on Tuesday, some market participants were prepared for a more significant pullback. However, rising optimism about the pace of economic growth in 2019 helped offset those profit-taking tendencies somewhat, and many stocks rose on company-specific good news. Speedway Motorsports (NYSE:TRK), Silicon Laboratories (NASDAQ:SLAB), and Domino's Pizza (NYSE:DPZ) were among the top performers. Here's why they did so well.

Speedway heads for the checkered flag

Shares of Speedway Motorsports soared 33% after the NASCAR racetrack operator's biggest shareholder made an offer to take the company private. Sonic Financial, which already owns a majority stake in Speedway, said it would pay $18 per share in cash to buy the remainder of Speedway's outstanding stock. With NASCAR going through some significant challenges, consolidation among racetrack owners has been on the rise. However, the deal is contingent on a majority of shareholders other than those related to Sonic principal O. Bruton Smith agreeing to the proposal, and the fact that the stock has risen above the $18 price suggests that investors might want a higher bid before they'll agree to getting bought out. 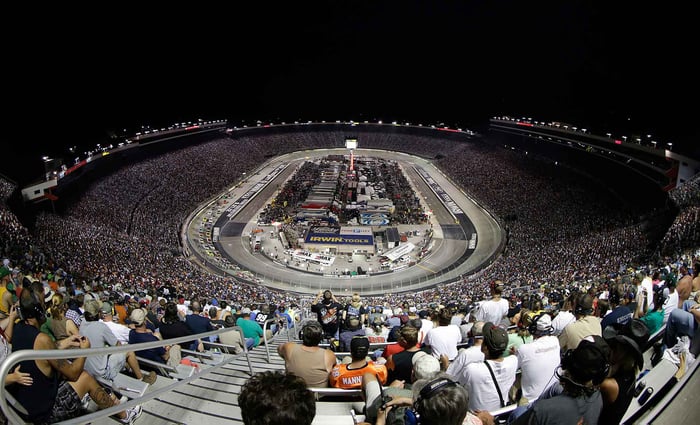 Silicon Labs has a sunny outlook

Silicon Laboratories saw its stock jump almost 18% following the release of its first-quarter financial results. The Austin-based semiconductor maker suffered declines in revenue and net income, including an 8% drop in sales that cut adjusted earnings by roughly a third. Yet CEO Tyson Tuttle was optimistic about the future, saying that robust bookings point to a rebound in the second quarter. Given that Silicon Labs continued to see encouraging results in its Internet of Things division, investors seem to be content with a less extreme decline in the bottom line than they had initially feared.

Finally, shares of Domino's Pizza finished up 5%. The pizza giant said that global retail sales were higher by 4.6% in the first quarter of 2019 compared to the year-earlier period, with foreign exchange headwinds holding back the company from even bigger gains. The top-line results weren't quite as good as most had expected, but a 10% rise in earnings per share exceeded the investor consensus forecast, and CEO Rich Allison pointed to a balance of same-store sales growth and store count expansion in driving gains. Even with some headwinds affecting its short-term results, Domino's looks like it's doing what it takes to reach its full potential worldwide.