Please ensure Javascript is enabled for purposes of website accessibility
Free Article Join Over 1 Million Premium Members And Get More In-Depth Stock Guidance and Research
By Dan Caplinger - May 8, 2019 at 11:24AM

The surplus retailer’s incremental progress is making some investors impatient.

It's tough to turn an ailing business around, and few people know that better than investors in surplus-retailer Liquidity Services ( LQDT 0.62% ). For a long time now, Liquidity Services has aimed to make changes to its business to seek more profitable lines that resonate more with its customer base. Yet at the same time, it's had to work through the loss of key relationships that played a major role in defining its core business in past years.

Coming into Wednesday's fiscal second-quarter financial report, Liquidity Services investors weren't entirely optimistic that the company would be able to avoid sales declines and ongoing losses. Some signs of life emerged in the report, but Liquidity Services still seems to have a long way to go before it'll be completely successful in mounting a sustained turnaround. 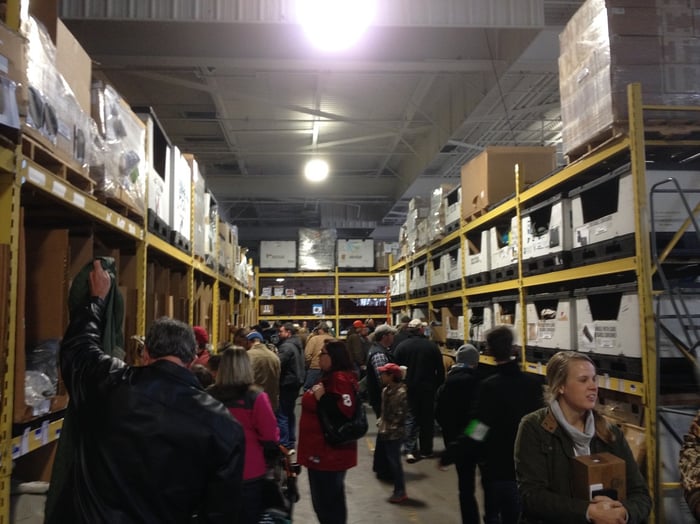 A mixed start to 2019 for Liquidity Services

Liquidity Services' fiscal second-quarter results showed some of the same pressures that the company has struggled with recently. Revenue of $56.8 million was down more than 5% from year-ago levels and fell just short of what most of those following the stock were looking to see. However, adjusted net losses of $700,000 were narrower than last year's figures, and the resulting $0.02 per-share loss on an adjusted basis was far better than the consensus forecast for $0.11 per share in red ink.

Liquidity Services saw slow-but-steady progress in some of its fundamental business metrics. Gross merchandise volume (GMV) came in at $155.4 million, up roughly 2% from year-ago levels. Once again, the completion of Liquidity Services' contract with the U.S. Department of Defense cost the company on the top line, hitting it for about 9 percentage points of lost growth. Overall revenue would've been higher by 17% if you took out the Defense Department contract's impact.

Auction metrics also picked up, in general. Registered-buyer counts were up more than 10%, to 3.58 million, continuing favorable trends from past quarters. Although the number of auction participants was down by 9,000, to 540,000, the speed of that decline decelerated. Liquidity Services completed 153,000 transactions, soaring almost 30% from what came in during last year's fiscal second quarter.

Liquidity Services saw the same segments carry the bulk of the weight in promoting growth. The GovDeals segment once again topped the list for bringing in gross merchandise volume, although the business continued to produce relatively little revenue and gross profit compared to the other parts of Liquidity Services' overall corporate structure. The retail-supply-chain group segment produced strong gains across the board, but once again, the capital-asset group weighed on performance, with large GMV declines that cut revenue by nearly half.

CEO Bill Angrick was pleased with certain elements of Liquidity Services' operations. He attributed strength in GMV to "growth of new clients and strong buyer activity on our platform," and he pointed to the company's new operational structure as promoting greater integration across all of Liquidity Services' businesses. By doing so, Angrick hopes to move forward with broader strategy to offer both self-directed and managed marketplace solutions to its customers.

Looking forward, Liquidity Services remains committed to its RISE long-term strategic vision. The surplus retailer wants to maximize recovery, increase sales, expand services, and get the most from the money it spends on operational costs. Technology, restructuring, and customer awareness will all give Liquidity Services an edge in moving forward on those fronts.

However, it'll take more time for Liquidity Services to realize its full vision. For the fiscal third quarter, the company sees gross merchandise volume of $155 million to $175 million, up slightly from its guidance for recent quarters. However, losses will persist, with estimates of $0.05 to $0.12 per share in red ink, even after adjusting for extraordinary items, on an adjusted basis.

Investors seemed reasonably comfortable with the progress that Liquidity Services showed, and the stock climbed 3% in morning trading on Wednesday following the announcement. The turnaround is far from complete, but shareholders are OK with giving Liquidity Services at least a little more time to make its vision for the future a reality.