Please ensure Javascript is enabled for purposes of website accessibility
Log In Help Join The Motley Fool
Free Article Join Over 1 Million Premium Members And Get More In-Depth Stock Guidance and Research
By Dan Caplinger – May 9, 2019 at 7:29AM

The outdoor retail specialist had to deal with more red ink.

Camping World Holdings (CWH -0.37%) found itself in the right place at the right time a few years ago. With the unexpected boom in the recreational vehicle industry, Camping World had a huge opportunity to take full advantage of high demand. The company did so by not only expanding its reach in the RV world, but also by looking at other ways to broaden its business toward becoming a more all-purpose outdoors retailer.

Coming into Wednesday's first-quarter financial report, Camping World investors were ready to see flat sales and a substantial pullback in profit. However, the outdoors retailer's results included substantial losses, calling into question some of the assumptions that shareholders have made regarding the extent of weakness in the recreational vehicle market and Camping World's part in it. 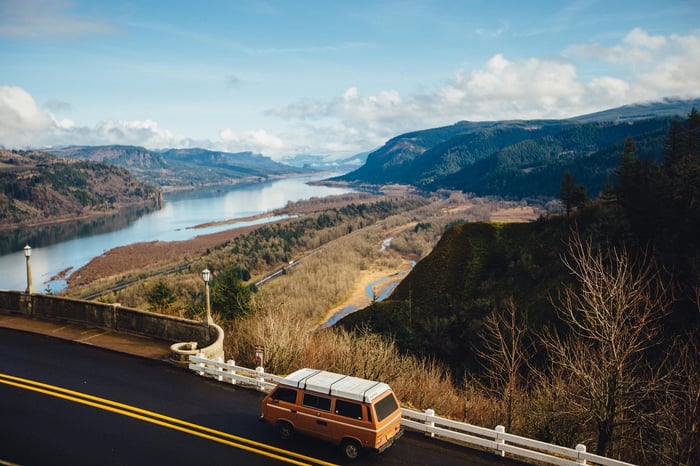 A slow start to 2019 for Camping World

Camping World Holdings' first-quarter results weren't particularly inspiring. Revenue was mixed. Revenue of $1.06 billion was up a fraction of a percent from year-ago levels, and that was more or less in line with what most of those following the stock had expected from the retailer. However, the company again posted adjusted net losses, this time amounting to $24.9 million. That led to adjusted losses on a per-share basis of $0.67, dramatically missing the $0.14-per-share profit that represented the consensus forecast among investors.

One big change that Camping World investors will notice is that the company made changes to its various reporting segments. Rather than breaking down results by dealership and retail, the outdoors specialist used a more holistic approach that incorporated the integration of various businesses within the company. The Good Sam services and plans segment saw revenue climb 5%, with higher gross profit and a modest rise in segment income. Membership counts rose 17% to 2.15 million, but same-store products, service, and other revenue saw a large 9.6% drop.

The much larger RV and outdoor retail segment saw more struggles. Segment revenue was up 0.4%, but same-store revenue plunged 11% as demand for RVs hit a rough patch. Pressure on gross profit helped contribute to reversing year-ago segment profit with a modest loss in the current year's period.

Can Camping World get back in the black?

CEO Marcus Lemonis wasn't at all alarmed about the losses. "We are excited about the progress we have made in our business," Lemonis said, and "our financial results for the quarter and the directional trends in our business were essentially in line with our full-year guidance expectations." The CEO pointed to improved sales trends that began at the end of the first quarter and have continued into April and early May as being encouraging for the future.

Camping World also took the opportunity to make some revisions in order to correct what it called immaterial errors. The adjustments were indeed relatively small, but they did result in lower reported earnings for last year's first quarter than it had originally reported.

Camping World investors didn't seem immediately concerned about the new losses, and the stock was down only a fraction of a percent in after-hours trading following the announcement. With a major shareholder having added to its stake in the company, some believe that a larger potential transaction might come soon. In any event, it'll be important for Camping World to see its RV business start to show positive results again soon, because otherwise it could be problematic for the outdoors retailer to make the most of what has been an important profit-making machine over the past several years.