Lockheed Martin (NYSE:LMT) is off to a strong start in 2019. The world's largest defense contractor has seen its stock price rally about 30% so far this year, following its strong first-quarter results.

Still, plenty more gains could still lie ahead for investors. Here's why.

At the core of Lockheed Martin's portfolio lies the F-35 Joint Strike Fighter. It is one of the Department of Defense's most important programs, as the multi-role aircraft is designed to be the most advanced strike aircraft for the Air Force, Navy, and Marines.

The F-35 is so important to the nation's security, in fact, that it's unlikely the Defense Department will let the program fail. Instead, the F-35 is almost certain to remain a core part of the U.S. military's -- and many of our allies' -- air defense plans for decades to come. Thus, Lockheed Martin is likely to enjoy a level of revenue stability and visibility that few other businesses experience.

Yet Lockheed Martin is far more than just a one-trick pony. The F-35 accounts for about 30% of the company's revenue. The rest is derived from other businesses such as missile, helicopter, and satellite systems -- all of which are seeing rising demand from the military.

Lockheed Martin is particularly adept at hypersonics, or weapons that travel at least five times the speed of sound. With China and Russia having formidable technology in this area, the U.S. military has made hypersonic technology a focus area. Thus, Lockheed Martin is likely to enjoy strong demand for its hypersonic missile and missile-defense systems in the years ahead.

All told, Lockheed Martin ended the first quarter with a backlog of more than $130 billion, including some of the military's most important programs. This puts the country's leading defense company on solid footing to deliver strong revenue and earnings growth in the coming decade.

That allowed Lockheed Martin to return more than $900 million to shareholders via dividends and share repurchases in the first quarter alone. The stock currently yields 2.48% -- tops among major defense companies: 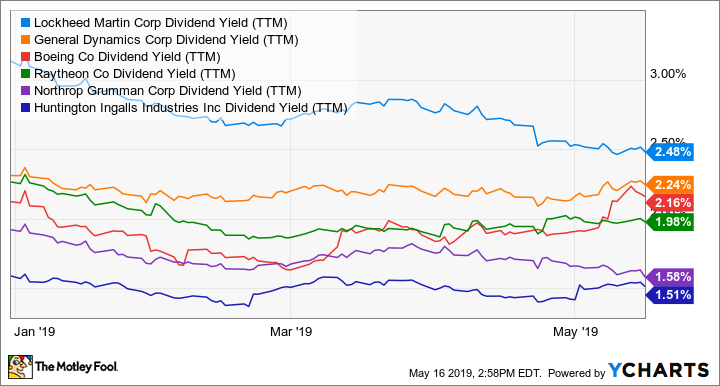 Despite its strong product portfolio, massive backlog, and strong cash flow production, Lockheed Martin trades at a discount to the average S&P 500 stock. The leading defense contractor currently trades for 13.6 times forward earnings estimates, compared to more than 17 times estimates for the S&P 500. While defense stocks tend to trade at lower price-to-earnings multiples than the broader market due to the cyclical nature of their business, I find Lockheed Martin's valuation attractive during a time when many other high-quality businesses have seen their P/E multiples expand to unjustifiable levels as the market has reached new highs.

Moreover, Lockheed Martin is trading at an even more attractive price when factoring in its expected long-term earnings growth rate. Analysts predict that the defense giant will increase its profits by 14% annually over the next five years. Although that may seem high for a defense stock, analysts expect the U.S. military's high-priority projects -- such as the F-35 and hypersonic missile defense systems -- to drive above-average growth for Lockheed Martin over the next half-decade. That puts Lockheed Martin's forward price-to-earnings-to-growth, or PEG, ratio at less than 1, which indicates an undervalued stock.

Investors may wish to use this opportunity to buy shares of this best-in-class defense company at a bargain price.