The name Endeavor Group Holdings might not immediately ring any bells, but the company controls a laundry list of high-profile segments that will be familiar to most investors. These include the mixed martial arts league Ultimate Fighting Championship (UFC), the Miss Universe beauty pageant competition, the Professional Bull Riders rodeo organization, and Hollywood's biggest talent agency, William Morris Endeavor.

Endeavor filed an S-1 with the Securities and Exchange Commission on Thursday for its initial public offering and said it plans to raise $100 million, though that figure is typically a placeholder this early in the process and will likely change. It has also not said yet how many shares it expects to offer. Endeavor will list its shares on the New York Stock Exchange using the ticker symbol EDR, though it hasn't announced a timetable for its public debut. 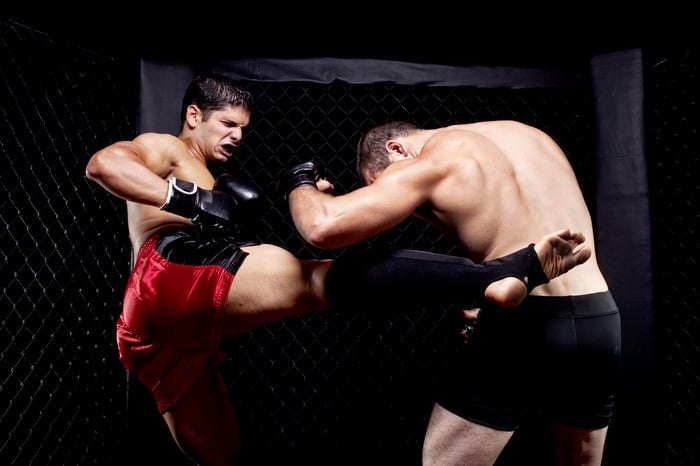 In its filing, Endeavor said it generated revenue of $3.61 billion last year, up about 20% year over year, though slower than the 28% increase it produced in 2017. The company was profitable in 2018 after years of losses, with net income of $361 million.

However, 2018's profitability was entirely the result of the $399 million gain made on the sale of its IMG College sports marketing segment. Excluding this one-time event, Endeavor would have lost $82.7 million. Revenue was $2.37 billion in 2016 and increased to $3.02 billion in 2017.

The financials aren't all bad. Much of the company's losses have been the result of its acquisitions and restructuring over the past several years. Excluding these one-time events, Endeavor's adjusted earnings before interest, taxes, depreciation, and amortization (EBITDA) were $355 million in 2016, $516 million in 2017, and $551 million in 2018.

Like a number of recent IPOs, Endeavor plans to issue dual-class shares in order to maintain control of the majority of the voting power of the company.

While the UFC and Miss Universe are among the most recognizable businesses run by Endeavor Group, the biggest contributor to its revenue comes from the media distribution deals the company negotiates for the National Football League (NFL), the National Hockey League (NHL), the International Olympic Committee (IOC), and other high-profile clients. With the public offering, Endeavor hopes to diversify its holdings further and become a "global entertainment, sports and content company."

"As the demand for content continues growing, developing new distribution channels to complement our clients' creative needs is essential," explained CEO Ari Emanuel in a letter accompanying the S-1. "We've built a series of businesses across streaming, audio, experiences, gaming, and education to ensure our clients and Endeavor are well-positioned for whatever the entertainment landscape looks like in the coming decades."

The company is backed by private equity investors Silver Lake, which owns a 51% stake, and Softbank Group, which holds a 5% ownership stake. These investors will be able to cash in on the IPO, but only after a 180-day lockup period that will begin with its public debut.

Not everyone is pleased with Endeavor's decision to go public. The Writers Guild of America (WGA) filed a lawsuit last month against the four biggest talent agencies -- Endeavor is the largest -- over its practice of packaging fees in the production of movies and TV shows. This involves payments for assembling a number of its clients -- like an actor, a writer, and a director -- into a package for the studio. The WGA says this creates a conflict of interest and recently advised its members to fire their agents over this and other controversial practices the group contends are illegal.

The WGA released a scathing statement about the IPO, which read in part:

Today's announcement that Endeavor plans to become a publicly traded company only strengthens the call for the conflicted and illegal practices of the major talent agencies to end. It is impossible to reconcile the fundamental purpose of an agency -- to serve the best interests of its clients -- with the business of maximizing returns for Wall Street. Writers will not be leveraged by their own representatives into assets for investors.

With all the negative publicity surrounding the acrimonious dispute with the WGA, it doesn't seem like this would be an ideal time to file for an IPO. The company will soon embark on a roadshow to drum up support for its public debut, but this latest "endeavor" seems like a fool's errand.

Investors should watch the WGA proceedings closely for developments before deciding whether this IPO is for them.