Please ensure Javascript is enabled for purposes of website accessibility
Log In Help Join The Motley Fool
Free Article Join Over 1 Million Premium Members And Get More In-Depth Stock Guidance and Research
By Jeremy Bowman – May 26, 2019 at 4:17PM

A close look at two of the market's favorite tech stocks.

Amazon.com (AMZN -2.72%) and Google-parent Alphabet (GOOGL -2.63%) (GOOG -2.63%) have arguably defined the technology industry more than any other two companies over the last two decades.

The average American consumer likely comes into contact with both these companies' services and products every day, whether that's through Google search, a video on YouTube, ordering a product on Amazon, or using a website powered by the cloud computing division Amazon Web Services (AWS). 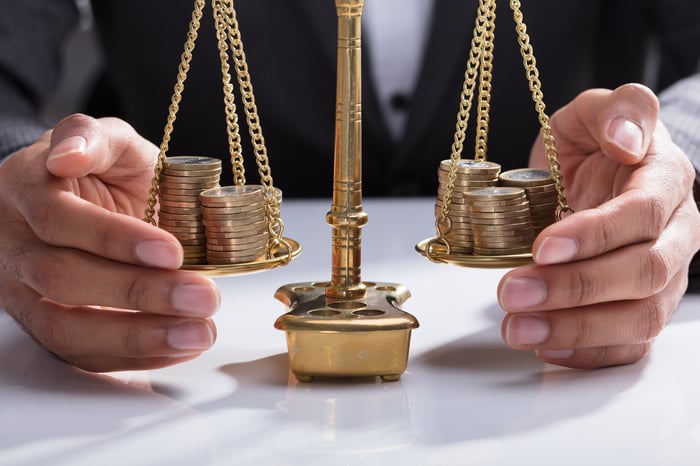 As stocks, it's not surprising that both companies have outperformed the market through much of their history. After all, Amazon and Google are part of the famed FANG group of tech stocks. The chart below shows how the two stocks have done over the last five years. 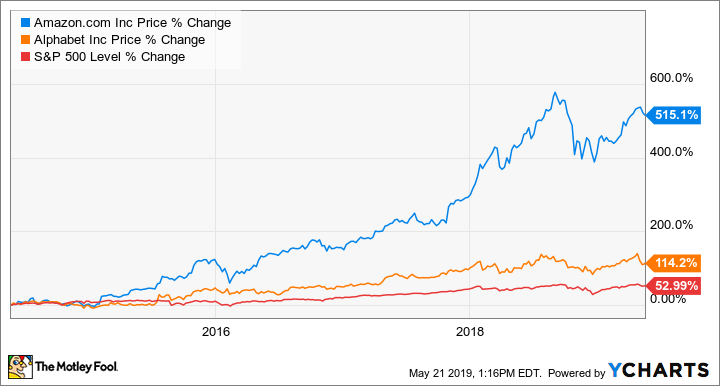 As you can see, both stocks have beaten the S&P 500, but Amazon has been the clear winner between the two. These days, both Amazon and Alphabet are flirting with trillion-dollar market caps as they continue to reign supreme over the tech industry and American business in general. Let's look at what each stock has to offer today in order to determine which is the better buy.

Amazon is best known as an e-commerce giant, but the company has leveraged that strength to spread into other businesses. Two of its most promising growth opportunities are AWS, where revenue jumped 41% to $7.7 billion in its most recent quarter, and advertising, the primary component of its "other" business, which saw a 34% increase in revenue to $2.7 billion. Its advertising business is also notably grabbing market share from Google. Not only are both of those segments growing quickly, but they're highly profitable. Amazon generated an operating margin from AWS of 28.4% last year, and digital advertising is known for its wide profit margins, as results from Google and Facebook make clear.

Meanwhile, Amazon is planting growth seeds in new businesses like voice-activated technology with Alexa. And in healthcare, it has acquired the online pharmacy PillPack and formed the joint venture Haven with Berkshire Hathaway and JPMorgan Chase, designed to be its own healthcare company.

Amazon hasn't forgotten about e-commerce. It's third-party marketplace is seeing significant growth, generating much higher margins than direct sales do. And investors were also encouraged by its first-quarter earnings report when the company said it would invest $800 million to make one-day free delivery available to its Prime members in the U.S., cutting the normal delivery time from two days. Prime is key to Amazon's network of competitive advantages, and the decision to cut the delivery time should help it improve customer loyalty and bring in more new members.

All of the moves above show the company successfully transitioning from revenue growth to profit growth and building its competitive advantages along the way. While the stock is highly priced, Amazon appears to be executing its strategy seamlessly.

A search giant looking for its next act

Alphabet stock stumbled after its latest earnings report showed the number of its paid clicks growing more slowly than expected. Paid clicks increased 39% in the period, a strong number but down from growth in recent quarters in the 50% to 60% range. Meanwhile, cost-per-click continued to decline, falling by 19% in the period. If that pattern continues, it could threaten Alphabet's historically strong revenue growth, which increased 17% in the first quarter, or 19% in constant currency.

Alphabet may be seeing clicks growth slow in part due to Amazon's aggressive entry into search advertising, though management blamed the sluggish growth in the quarter on changes to how ads were presented. The company was also briefly hit by the Trump administration's blacklisting of Huawei, the Chinese smartphone maker that it views as a security threat. It gave companies like Google a 90-day reprieve before they must stop doing business with Huawei, though trade tensions remain a question mark.

Google's core search business remains strong since the company has a dominant market share in much of the world, but Alphabet continues to look for other businesses to find its next big avenue for growth. Among its Other Bets, as the company calls them, the most promising appears to be Waymo, its autonomous vehicle division. It has a ridesharing service in Phoenix, Waymo One, and plans to expand that service to other cities. According to Morgan Stanley, Waymo could be worth as much as $175 billion. Meanwhile, Google is growing its hardware business, including the Chromebook laptop, Pixel smartphone, Google Home smart speakers, and Nest smart-home device.

Despite those growth areas, Alphabet's near-term fate will likely by determined by its advertising business, as the latest quarterly report made clear.

Value investors may prefer Alphabet, as the stock is considerably cheaper than Amazon, trading at a P/E of 29, versus 77 for Amazon. But between the two companies, Amazon seems to have the better strategy, having built a network of competitive advantages that it is using to expand into new businesses and leverage existing ones. As a result, it's seeing tremendous profit growth.

Alphabet, on the other hand, has struggled to move beyond search, and its new business ventures seem disconnected from its strength there.

Because of its profit growth, overall strategy, and reputation for disrupting industries, Amazon looks like the better buy here. Alphabet is no slouch as a tech stock, but the company seems to face more near-term challenges.