Please ensure Javascript is enabled for purposes of website accessibility
Log In Help Join The Motley Fool
Free Article Join Over 1 Million Premium Members And Get More In-Depth Stock Guidance and Research
By Neha Chamaria – May 30, 2019 at 8:30AM

Wheaton Precious Metals' focus on gold over silver could trigger a rally in its stock price.

Precious metals stocks haven't made investors much money in recent years despite their popularity as a hedge against uncertainty. The Dow Jones Precious Metals Index, for example, which tracks the performance of 31 gold, silver, and platinum-group metals stocks listed in the U.S., has slumped nearly 60% in the past decade. Yet, one silver and gold stock gained 11% during the period: Wheaton Precious Metals (NYSE: WPM).

Even that strong performance, however, pales in comparison to those of rivals Franco-Nevada (FNV 1.97%) and Royal Gold (RGLD 0.97%), primarily because these two are gold-focused companies, unlike Wheaton Precious Metals. Wheaton shares could soon play catch-up, though, what with the company selling record gold volumes in the first quarter. Here's why it's such an important milestone for Wheaton Precious Metals and its shareholders.

Wheaton is finally beating its rivals

From a heavily silver-reliant company to making more money from gold than silver, Wheaton Precious Metals' product mix has changed dramatically in the past year or so. In 2018, the company not only reported record gold production and sales but its gold revenue of $441 million surpassed Franco-Nevada's and Royal Gold's. Wheaton's sales from silver were the highest among the trio as well, making it the largest precious metals streaming company in terms of revenue. The trend continued into the first quarter, with Wheaton's total revenue rising 13% year over year backed entirely by a 22% jump in gold production.

Now, "production" here doesn't mean digging the earth to extract metals, as you'd generally expect with a precious metals company. That's what mining companies do, but Wheaton Precious Metals, Franco-Nevada, and Royal Gold are streaming and royalty companies that don't operate mines. Instead, they buy metals from miners at discounted prices in return for financing them up front. 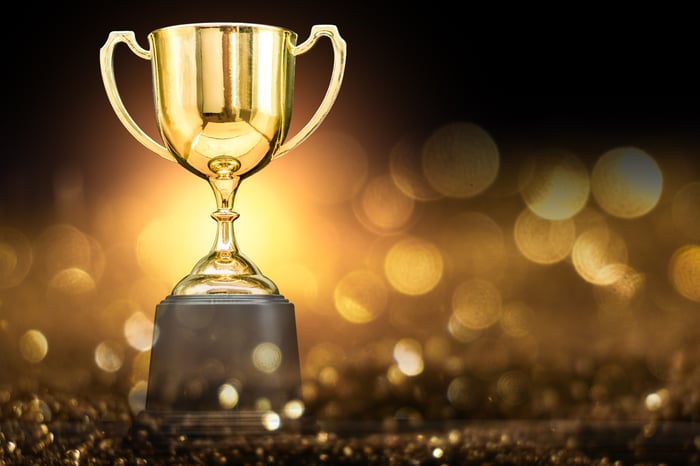 Put simply, Wheaton's gold sales are surging because it struck more deals with gold miners than with silver producers in recent years, and the mines its agreements are attached with are producing large amounts of gold. Its gold deals include:

Two of the gold streams, San Dimas and Stillwater, commenced only mid-last year, which is also the real reason Wheaton's gold volume surged last quarter. Vale's Salobo, however, continues to bring in the bulk of the gold for Wheaton, accounting for nearly 65% of its total gold production in Q1.

Wheaton has paid nearly $3 billion in up-front payments to Vale for Salobo so far for right to buy 75% of the gold produced from the mine for life at the lower of $400 per ounce, adjusted for inflation, or the prevailing gold spot price. Compare that price with gold's current price of above $1,250 per ounce and you can gauge the kind of margins Wheaton enjoys.

There's good news for investors: Vale recently proposed a $1 billion expansion at Salobo, scheduled to start in 2022 if approved. That could prove to be a game changer for Wheaton in terms of both gold volume and cash flow.

You only have to look at one chart to get a sense of how valuable Salobo is to Wheaton: its Q1 cash from operations (CFO). Here, I've plotted Q1 CFO in descending order for Wheaton's key mines, both gold and silver, to give you an idea. 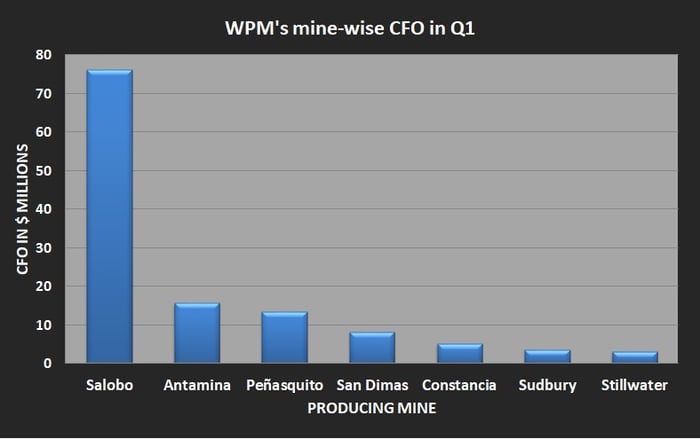 To put that in numbers, of the $118.2 million in CFO that Wheaton generated in Q1, a whopping $76 million came from Salobo. In the same quarter last year, Salobo made up roughly 40% of Wheaton's cash flow. Wheaton used the bulk of the cash flow it generated in Q1 to repay debt worth $81 million, which is a good move in a rising interest rate environment.

The chart above reveals the kind of benefit Wheaton can reap from Vale's Salobo expansion, provided the companies continue to be partners. Given their long-standing relationship, though, there's little reason to believe they won't be.

For now, even without accounting for potential growth in Salobo and other projects such as Hudbay Minerals' Rosemont mine, which is expected to hit commercial production by the end of 2022, Wheaton's outlook is encouraging. The company projects its gold equivalent ounce (GEO) production to hit 690,000 ounces in 2019 and average 750,000 ounces over the five years through 2023. If that estimate is on target, gold will make up half of Wheaton's total production and silver only 42%.

This stock looks better than ever

With a strong first quarter, Wheaton Precious Metals has kicked off 2019 on a positive note. This comes close on the heels of the company resolving a long-pending tax dispute in Canada at a fraction of the originally estimated cost of $1 billion -- it paid $29 million as part of the settlement in the fourth quarter. To be sure, Wheaton is still awaiting reassessment notices for back taxes for 2005 to 2010 in the coming weeks, but management is confident it won't be slapped with any additional cash taxes for the period.

As things stand now, organic gold growth should fortify Wheaton's financials thanks to stronger cash flow that the company can use to pare down debt, pay dividends, and acquire new streams. Wheaton's strategy to shift to gold seems to be working in its favor already.