This household name has been stuck in a rut for a few years, but investors seem to have missed the soft drink giant's extreme focus on richer profit margins.

Soft drink giant Coca-Cola (KO 0.56%) has been a difficult stock to love in recent years. Coke's shareholders have pocketed a 22% return over the past five years, missing out on a 43% surge in the S&P 500 market barometer. Over the last year alone, Coke traded sideways while the broader market enjoyed a 15% gain. The gap closes a little bit if you assume that all dividends were reinvested over that half-decade period, but not by much. From that perspective, Coca-Cola delivered a 43% return, versus a 58% dividend-powered gain for the S&P 500.

Is the stock stuck in a sticky sugar puddle in the middle of Wall Street, or would this be a great time to pick up Coca-Cola shares at a discount to the broader market? Let's have a look. 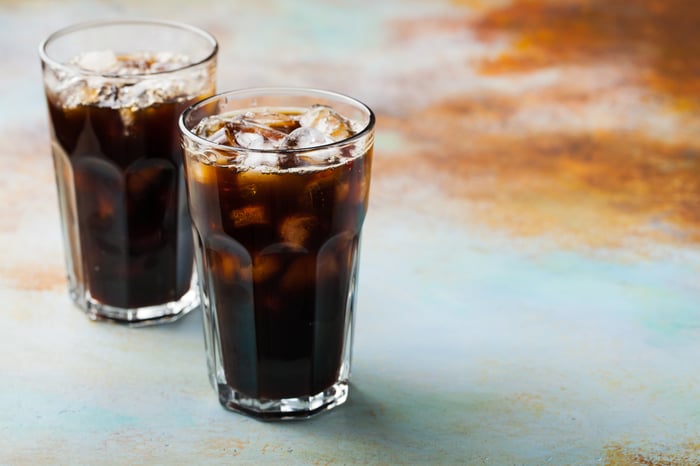 Why is the stock so flat?

Coke has been spinning its wheels, for several good reasons. Increasingly health-conscious consumers have started to reject high-calorie soft drinks, making it harder to sell flagship brands like Coca-Cola, Sprite, and Fanta. Coke now aims to be a "total beverage company," going beyond mere diet sodas to develop a stronger presence in sub-markets such as tea, coffee, and fruit juices. Change is hard, even if the company has decades of experience and impressive established product portfolios in the recently anointed core markets.

While pursuing this overarching vision, the company is also remodeling its bottling and distribution network to a heavily franchised system. This effort has been good to Coke's profit margins over the past two years, but at the cost of significantly lower revenues. Again, change is hard. This time, it's investors who often don't appreciate the wider gross and net margins in the light of plunging top-line sales.

This isn't the first time this centennial company has encountered an obstacle. Shortly after World War II, Coke's share of the soda market peaked at 60% before PepsiCo (PEP 1.50%) emerged from bankruptcy and started stealing market share. Forty years later, Pepsi had amassed a 19% market share while Coke's had fallen back to 22%. That persistent challenger hardly killed Coke as a brand or as a company. Pepsi expanded into a snack food titan -- a much larger target market -- while Coke kept its eye on the more profitable beverage cooler. These days, Pepsi roughly doubles Coke's annual revenues but the two rivals go neck and neck in every type of profit measurement.

I like the way Coca-Cola consistently aims for a more efficient business model while Pepsi keeps expanding into less profitable sectors. Mr. Market made the mistake of shrugging off Coke's margin expansions and focus on its dwindling revenues during this brief transitional period. The soft drink giant will come back swinging with a broader beverage portfolio backed by a more profitable business model.

Yes, it's a good idea to pick up some shares in Coca-Cola right now.