Please ensure Javascript is enabled for purposes of website accessibility
Log In Help Join The Motley Fool
Free Article Join Over 1 Million Premium Members And Get More In-Depth Stock Guidance and Research
By Eric Volkman – Jun 8, 2019 at 6:32AM

The logistics giant is tacking on an additional day to its delivery rounds.

It might be surprising to learn that, outside of holiday periods, FedEx (FDX 1.55%) does not deliver residential packages every single day. For most of the year, the logistics king won't bring any of your boxes to you on Sunday, unless they contain goods such as those it calls as "urgent healthcare items" -- and, no, that doesn't include the deluxe robo-massage easy chair you just ordered.

But this is about to change. The company said that it'll offer seven-day delivery for most of its U.S. clientele starting in January 2020. So, FedEx is ripping a page from deliver-any-day Amazon.com's (AMZN -2.72%) book. How will this affect its business? 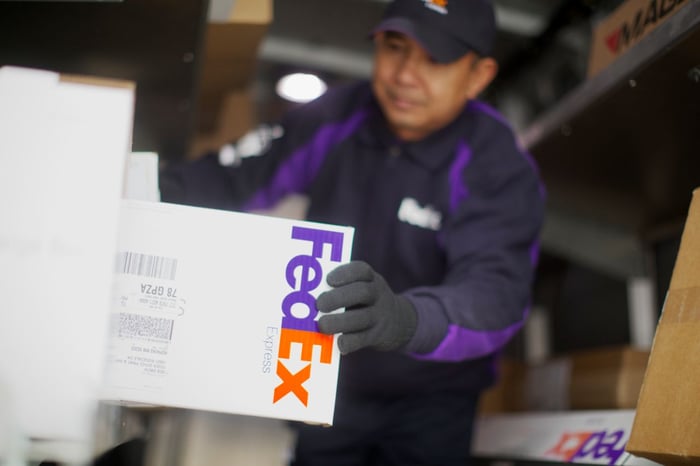 This is an expansion and a consolidation all at once. In addition to including Sunday as a delivery day, FedEx will also take control of its SmartPost shipments. As the name implies, these are smaller packages delivered in conjunction with the U.S. Postal Service, which handles the "last mile" delivery to the customer's door. FedEx will now consolidate these packages into its FedEx Ground service.

The company says that, like Amazon, it will expand its use of independent, third-party delivery service providers for this work.

Amazon, of course, is a major reason why FedEx is putting Sunday on the work calendar. The massive retailer continues to rile the world of logistics. The company very recently announced a big expansion of its free one-day shipping perk for members of its Prime program. The standard for years had been two-day shipping.

Woe betide any peer that doesn't follow this lead into one-dayville; smartly, Walmart subsequently announced it would do the same for around 220,000 of its products.

So, basically, we're about to live in a world where one-day delivery is the rule, not the exception. All logistics players have to be prepared and ready for this new game.

Well, that was fast

FedEx clearly saw this coming. In fact, it already expanded its delivery week last September, when it put Saturday on the schedule (again, this had only been a FedEx delivery day during holidays).

Besides, the company had already been scaling back the SmartPost program. According to company data, it has retaken around 20% of these packages from the post office since 2016. Apparently, the company's system flagged them as candidates for consolidation in a FedEx Ground delivery going to the same address or one nearby.

The ever-rising popularity of online retail means more shipments, a fact that certainly isn't lost on FedEx. It's estimating that average daily volume for small packages alone in the U.S. will double by 2026, which isn't exactly a long time frame. The quicker it can ramp up for this box-filled future, the better.

On the educated guess that the company anticipated these moves, we can assume that they're baked into its guidance. This was last proffered with the company's third-quarter 2019 results, and it anticipates -- save for relatively minor adjustments to a corporate retirement plan -- per-share earnings of $11.95 to $13.10 for the entirety of this fiscal year. That's down from the fully adjusted $15.31 EPS of 2018.

Interestingly, analysts seem to be more optimistic. The 26 prognosticators tracked by Yahoo! Finance collectively anticipate that the company's EPS this fiscal year will be $15.48.

FedEx's share price has dropped by almost 40% over the past year. It's not only the continued emergence of Amazon; the company's huge $4.8 billion 2016 acquisition, European peer TNT Express, has still not been fully integrated into its operations. A purchase that size can hammer the finances of even the wealthiest companies, and the process of absorption can be long.

With that share-price dive, FedEx stock's PEG ratio is just shy of 1.3 (a PEG ratio of 1 theoretically indicates a stock is fairly valued).

That seems low to me. FedEx has a long track record and has managed to grow its key fundamentals not only over the course of many years, but through times that were challenging for the logistics industry. I think it'll meet or even beat the "Amazon challenge," and take full advantage of the increasing package-ization of this country. Investors should consider scooping up some of this stock.

John Mackey, CEO of Whole Foods Market, an Amazon subsidiary, is a member of The Motley Fool's board of directors. Eric Volkman has no position in any of the stocks mentioned. The Motley Fool owns shares of and recommends Amazon and FedEx. The Motley Fool has a disclosure policy.