The puts and takes behind a disappointing month for shareholders in these three stocks.

May proved to be a very tough month for the package delivery and logistics industry. Shares in FedEx (FDX 5.31%) fell a whopping 18.6%, key rival UPS (UPS 4.67%) was down 12.5%, and global logistics services company Expeditors International of Washington (EXPD 2.49%) slumped 12.4% -- all according to data provided by S&P Global Market Intelligence.

Although UPS gave its first-quarter earnings at the end of April, and Expeditors did the same in the first week of May, the fact that all three stocks declined in line with transportation ETFs suggests the move was really about fear of an escalation in trade conflicts. The last thing that international transportation companies need is an increase in protectionism, which disrupts the trade flows that they make money from. 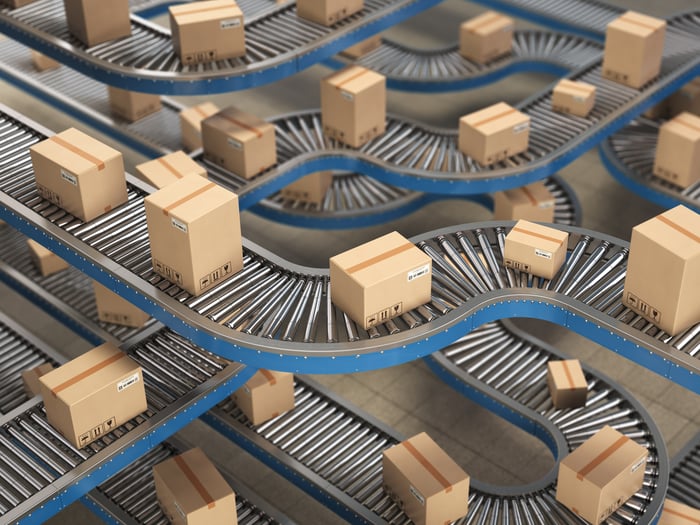 The three share exposure to global trade sentiment, but there are also stock-specific considerations at play here. For example, Expeditors has a high-margin customs brokerage business that could be hit by a drop in international trade. And its air-freight services revenue actually declined in the first quarter, with CEO Jeffrey Musser noting that "the air market was the only area that was challenged, particularly as customers reduced export volumes out of North Asia."

FedEx is arguably more susceptible to trade issues than UPS right now, not least because it's trying to integrate its acquisition of Europe-based TNT Express. FedEx CEO Fred Smith was warning of slowing conditions in Asia and Europe as far back as the second-quarter earnings call in December, and those conditions appear to have extended through FedEx's third quarter as well with CFO Alan Graf noting: "Slowing international macroeconomic conditions and weaker global trade growth trends continue, as seen in the year-over-year decline in our FedEx Express international revenue."

For reference, FedEx started its fiscal 2019 predicting full-year EPS of $17 to $17.60, excluding pension accounting adjustments and TNT integration expenses. But come the third-quarter earnings report in March, and the comparable guidance is now for just $15.10 to $15.90.

Turning to UPS, it's fair to say that the market has become a lot more skeptical about the company in recent years. In a nutshell, after years of underspending on its network compared with FedEx, UPS is now ramping up capital expenditures in order to support growth, notably in e-commerce deliveries. As such, it's causing uncertainty around near-term guidance because the extra spending is crimping free cash flow and earnings.

There's evidence to suggest that the market is being overly harsh on UPS. After all, what's so wrong in forgoing near-term profit in order to invest for future growth?

That said, UPS has its doubters, and the introduction of more uncertainty around end-market demand from trade conflicts is going to exacerbate their fears.

For all three companies, an escalation of trade conflict is bad news, and it's impossible to avoid the subject given political rhetoric over the matter. While the trade conflict might be very good news for the U.S. economy in the long term, it's not great news in the near term for transportation companies.

Moreover, if a period of extended tariffs creates structural challenges in the economy, then FedEx, UPS, and Expeditors will see disruptions in their businesses and there would likely be a need to restructure.

Looking ahead, Expeditors investors will be keeping a close eye on its air freight business while hoping that customs brokerage activity doesn't take a hit in future quarters.

For FedEx, it's not just about global trade. There's also a need to see an improvement at TNT Express, particularly with winning back some of the market share in high-margin express and parcel products it lost following the NotPetya cyberattack in 2017.

With UPS, management has already alerted investors to the fact that the upcoming quarter will see relatively heavy investment, so the numbers it reports could create some doubts around its full-year guidance.

All told, it's hard to know what impact tariffs and trade war rhetoric will have on the earnings of these three companies, but we can see the impact on their share prices. In this context, don't be surprised if transportation stocks continue to be pushed around by sentiment over global trade in the near future.