The Cupertino tech giant is extracting hefty concessions from the cable operators.

As if being a mobile virtual network operator (MVNO), which purchases wholesale capacity from national wireless carriers in order to resell service under another brand, wasn't already hard enough, the last thing an MVNO wants to deal with is getting squeezed by Apple (AAPL 2.45%). At the same time, it's awfully hard to compete in the wireless market without carrying the iPhone.

The Cupertino tech giant is now leveraging the iPhone's popularity to extract some hefty concessions out of Comcast (CMCSA 1.18%) and Charter (CHTR 1.76%), which have been looking to expand their telecommunications businesses into the wireless market. 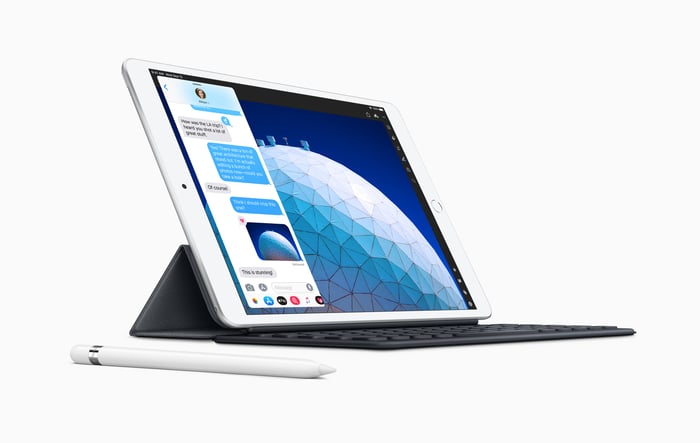 Comcast has to sell discounted iPads in order to carry the iPhone. Image source: Apple.

CNBC reports that Comcast and Charter have agreed to sell a variety of Apple products in order to secure the iPhone for their MVNOs -- Xfinity Mobile and Spectrum Mobile, respectively -- which operate on Verizon's network.

Incredibly, Apple has gotten Comcast to commit to sell a quota of iPads while also subsidizing the cost, according to the report, even as the subsidy model has mostly died in the U.S. for smartphones. However, Comcast is absorbing the costs of those subsidies, a stark contrast to the old model, in which carriers would use service agreements to recoup the costs. Comcast offers four different iPad models on its site at varying discounts compared to Apple's retail prices.

While Comcast is pushing iPads, Charter will be trying to move Apple TVs that serve as set-top boxes for Spectrum cable service. There aren't any discounts involved, but Charter -- which is the second-largest cable operator in the U.S. behind Comcast -- has now become the largest third-party distributor of Apple TVs, according to the report. Apple is requiring the iPad subsidies from Comcast since Xfinity cable subscribers aren't able to replace their set-top boxes with Apple TVs like Spectrum customers can.

Whether or not these partnerships will pay off for Comcast and Charter is unclear, as the companies' MVNO operations are not profitable. "It should be clear by this point that the current [MVNO] deal is a money loser for the cable operators; it's not profitable and it likely never will be," MoffettNathanson analyst Craig Moffett wrote in a research note earlier this year. The cable companies had hoped to offload traffic onto their own networks of small cells and Wi-Fi hotspots to improve the economics, but aren't there quite yet, according to Moffett.

Xfinity Mobile and Spectrum Mobile currently have a combined subscriber base of roughly 1.8 million.