FedEx and UPS better be worried if they weren't already.

Just days after FedEx (FDX 3.48%) said it would not renew its FedEx Express contract with Amazon.com (AMZN 3.15%) in a blow to the e-commerce giant's one-day delivery dreams, Amazon and General Electric's (GE -0.02%) Capital Aviation Services (GECAS) division have announced a new deal to add 15 more cargo aircraft to the Amazon Air fleet. The news will expand the companies' partnership announced a few months back that included five leased aircraft. 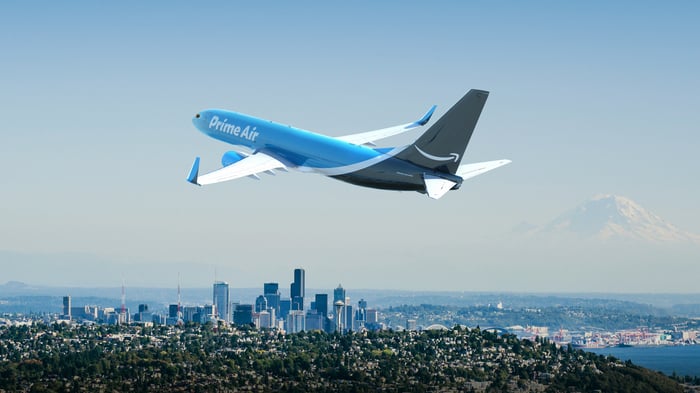 Prime Air has since been rebranded as Amazon Air. Image source: GE.

Amazon and GE said the aircraft will operate out of over 20 air gateways within the Amazon Air network, as the e-commerce giant has continued to expand the number of airports it flies out of. Amazon broke ground on its $1.5 billion Amazon Air hub near Cincinnati just last month. "All right, let's move some earth!" CEO Jeff Bezos proclaimed before hopping into an excavator for the occasion.

We're investing $1.5 billion in our new air hub to get you your packages faster. Three million square feet, and it's going to create 2,000 jobs. And if you're guessing that driving a front loader was fun, you're right! #amazon #prime pic.twitter.com/Cud4orKrC4

That hub will open in 2021, but Amazon also says it will open other new air facilities at Fort Worth Alliance Airport, Wilmington Air Park, and Chicago Rockford International Airport later this year.

"These new aircraft create additional capacity for Amazon Air, building on the investment in our Prime Free One-Day program," Amazon operations exec Dave Clark said in a statement. "By 2021, Amazon Air will have a portfolio of 70 aircraft flying in our dedicated air network."

Amazon Air launched in 2016 and getting up to 70 aircraft in just five years is an aggressive timeline, as converting and preparing aircraft takes quite some time. Many of the aircraft are often used passenger models that are converted to freighters capable of carrying cargo; the aircraft in the GECAS announcement are Boeing 737-800 converted freighters.

"We're delighted to support Amazon Air's dedicated air network," GECAS exec Richard Greener added. "The capability of the 737-800 freighter will further Amazon's ability to provide reliable and regional delivery to its customers for years to come."

Competing in "transportation and logistics services"

If FedEx and UPS weren't already worried by now, the announcement just serves as more evidence that they should be very concerned. FedEx continues to downplay the competitive threat, noting that Amazon represented just 1.3% of revenue in 2018, even as the shipper acknowledges in regulatory filings that Amazon's growing in-house delivery operations represent a risk factor to its business.

In terms of Amazon's own regulatory filings, the e-commerce company's most recent annual report included a new addition: It now competes in the market for "transportation and logistics services."