The e-commerce titan aims to take it up another notch with its fifth annual sales event.

Prime Day debuted in 2015 as a celebration of the company's 20th anniversary and featured 24 hours of deals for Amazon Prime members. In 2017, the sale was stretched to 30 hours, and last year it was extended to 36 hours.

Next month, the sale that was originally billed as "Black Friday in July" will last for two full days, beginning at 12 a.m. PDT on Monday, July 15, with more deals than ever before. 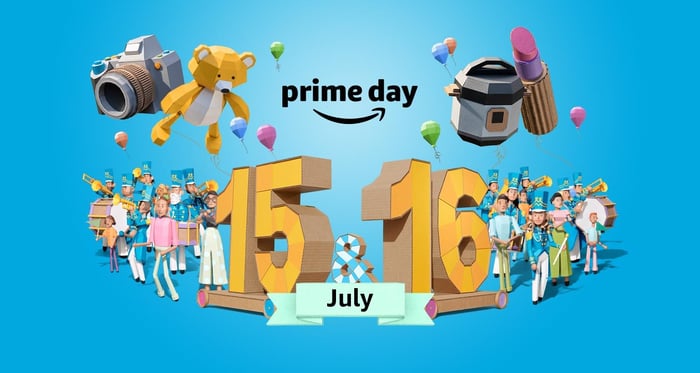 In a press release touting the event, the e-commerce juggernaut said it would offer members around the world more than 1 million deals -- including its best Prime Day deals ever on Alexa-enabled devices. As a bit of a preview, the company said one of its biggest bargains would be available beginning today: A Toshiba HD 43-inch Fire TV Edition Smart TV will sell for $179.99 ($120 less than usual) through June 30 or while supplies last.

The company is also offering early deals on a number of devices that incorporate its Alexa-powered, voice-enabled technology. These include Jabra Elite 85h wireless headphones and the iOttie Easy One Touch Connect smartphone car mount.

"Our vision is that Prime Day should be the absolute best time to be a member -- when you can enjoy shopping, savings, entertainment, and some of the best deals Prime members have ever seen," said Jeff Wilke, Amazon's worldwide consumer chief.

Those who aren't Prime members can, of course, access the deals by joining, but they also have the option of starting a 30-day free trial.

Amazon says it's pulling out all the stops this year, roping in actors, musicians, athletes and top brands to make Prime Day a star-studded event -- though it's withholding the names of those involved for now. A number of well-known retailers and brands will host new product launches in conjunction with the sale, among them Nickelodeon, Levi Strauss and Schwinn.

Whole Foods Market, which is owned by Amazon, is also planning product launches and discounts as part of Prime Day.

The company is also partnering with FEED, a charity that sells artisan-made products from around the world and uses the proceeds to feed hungry schoolchildren. Amazon will offer a limited-edition canvas tote. For each one sold, FEED will donate 10 meals in the U.S. to support No Kid Hungry's free school breakfast program.

The 2017 Prime Day was, up to that point, Amazon's single-biggest shopping day ever, with higher total sales than 2016's Black Friday and Cyber Monday combined. But producing a midyear sales surge isn't the only reason Prime Day is important to Amazon.

Amazon doesn't disclose revenue from Prime Days. It has said in the past that it uses the promotion to hook in new Prime customers and subscribers, which now total more than 100 million worldwide.

In the U.S., it's estimated that Prime members spend $1,400 a year, on average, compared to just $600 a year by non-Prime customers, according to Consumer Intelligence Research Partners. This makes clear just how much of a vested interest Amazon has in attracting new subscribers -- and Prime Day is one of the company's top draws.

After last year's event, the company said "it welcomed more new Prime members on July 16 than any previous day in Amazon history."

No wonder it's expanding the sale to 48 hours.