The Sears spinoff is making progress on some of its larger-scale redevelopment opportunities, which take longer to pull off but have greater upside.

Seritage Growth Properties (SRG 2.70%) was formed four years ago in order to acquire billions of dollars of real estate from struggling retail giant Sears Holdings and redevelop it for better uses.

With Sears and sister chain Kmart having closed the majority of their stores over the past few years -- both before and after filing for bankruptcy -- it has become even more vital for Seritage to execute successful redevelopment projects as quickly as possible. Indeed, funds from operations (FFO) turned negative in late 2018 and hasn't yet recovered.

Fortunately, Seritage Growth Properties is starting to complete redevelopment projects at a steady pace. In just the past two months, the REIT has reached major milestones at several of its most important properties.

While there are a number of gems in Seritage Growth Properties' real estate portfolio, its 12.3-acre parcel adjacent to Aventura Mall in South Florida is probably the best of the bunch. Aventura Mall is one of the most productive malls in the U.S. Last year it was ranked as the second most valuable mall in the country, with a valuation exceeding $4 billion.

The plan to redevelop this site predates Seritage. In late 2014, Sears Holdings announced that it had filed plans with the city of Aventura to replace its store with a nearly 300,000-square-foot mixed-use center. The current plan is to build approximately 217,000 square feet of open-air retail, restaurant, and entertainment space, with the possibility of adding another 100,000 square feet of space in a second phase of development.

However, until recently, Seritage hadn't revealed any tenants for this property, now known as the Esplanade at Aventura. News began to trickle out in March, when it said that highly acclaimed chef John Fraser would open a restaurant there in late 2019. Last month, Seritage announced five additional restaurant concepts that will open next spring, including a food hall. Pinstripes -- an "eatertainment" chain featuring bowling and bocce ball along with food and drink -- will follow in the summer of 2020.

Eventually, Seritage plans for more than 60% of Esplanade at Aventura's square footage to be devoted to retail. But by signing up food and entertainment concepts first, it will be in a better position to convince potential retail tenants that the new development will have high foot traffic.

Seritage also reached another big milestone last month, breaking ground on the redevelopment of the former Sears store at Valley View Mall in Dallas. The entire mall is being replaced by a new urban neighborhood, and Seritage will play a big role in that transformation, in partnership with Dallas-based developer KDC and Toll Brothers. 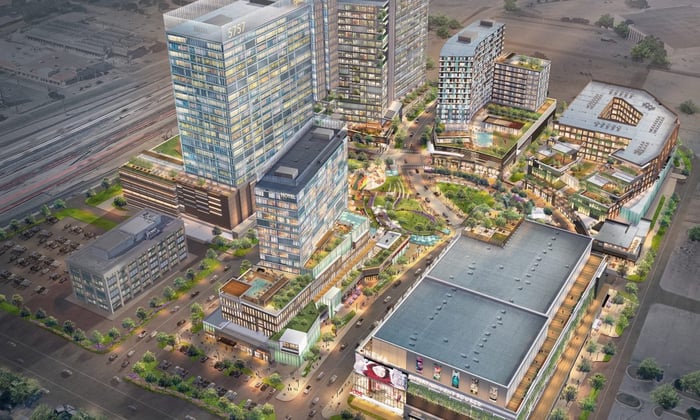 In the first phase of the project (called Park Heritage), Seritage and KDC will collaborate to build two high-rise office towers with up to 1.8 million square feet of space. Meanwhile, Toll Brothers will build roughly 300 luxury apartments.

Future phases of development could increase the total number of multifamily units to as many as 800 and add up to 300 hotel rooms. Retail, restaurants, and entertainment concepts will also be a big part of the long-term mix at Park Heritage, occupying up to 275,000 square feet of space.

Vertical construction won't begin until next year, so this is definitely a long-term project for Seritage. Most of the revenue streams are likely to come on line in 2021 and beyond.

A Chicago redevelopment project could get started soon

Finally, Seritage's plan to redevelop a Sears store on the edge of Chicago was approved by the Chicago Plan Commission last week. The proposal still needs to be approved by the city council, but that is likely just a formality given that Seritage has won the backing of the local alderman.

Seritage owns three parcels of land at this site, which formerly housed a large freestanding Sears store, a Sears Auto Center, and parking lots. Seritage and its partner Tucker Development plan to convert the former store building to a mixed-use building with a grocery store, a health club, and 161 apartments. They will build another 152 housing units on a parking lot across the street and replace the Sears Auto Center with 152 apartments and 18,000 square feet of retail. In total, the project will cost approximately $117 million.

Like the Dallas project, the redevelopment of this Chicago site may not start generating returns for a couple of years. However, large-scale development projects like these will be the biggest driver of future FFO growth at Seritage, more than replacing the rent that Sears Holdings used to pay.

This REIT Just Abandoned Its Strategy
411%