Please ensure Javascript is enabled for purposes of website accessibility
Free Article Join Over 1 Million Premium Members And Get More In-Depth Stock Guidance and Research
By Adam Levine-Weinberg - Jul 2, 2019 at 7:26AM

PREIT is on track to complete its current redevelopment pipeline over the next year or so, which will lead to improved financial results.

During 2019, shares of Pennsylvania Real Estate Investment Trust ( PEI -4.13% ) have fallen to levels not seen in nearly a decade, as investors have grown increasingly pessimistic about the future of malls in the United States.

Yet PREIT has done a great job of adapting its malls to the times and upgrading its tenant mix to boost customer traffic. It is slated to complete a slew of redevelopment projects over the next 12 months, which should drive a return to growth in key earnings metrics. Yet investors haven't given the REIT any credit for its progress. With the shares continuing to trade for around $6, I loaded up on more PREIT stock last week.

The plan has worked

In recent years, management has prioritized improving PREIT's real estate portfolio. This has included a combination of disposing of weaker malls and investing in stronger properties to make them even better. Since 2013, PREIT has gotten rid of nearly half of its malls, selling some and selectively turning over others to lenders by defaulting on mortgages. It currently has just 18 core malls -- plus one more under development -- compared to about three dozen at the beginning of 2013.

This strategy is proving very prescient. Many of the malls that have exited PREIT's portfolio in recent years were anchored by Sears stores that subsequently closed. While other mall REITs have been hit hard by Sears' store closures, PREIT had already reduced the number of Sears stores in its portfolio to just seven at the time of the chain's bankruptcy filing last fall, down from more than two dozen six years earlier. (Six of those seven stores have remained open.)

The other part of PREIT's plan to boost performance -- reinvesting in its remaining properties -- is also paying dividends. In 2017, the REIT redeveloped three former Sears stores at malls in secondary markets (Scranton, Pennsylvania; Camp Hill, Pennsylvania; and Florence, South Carolina), bringing in a mix of big-box tenants including Dick's Sporting Goods and various off-price retailers. Sales per square foot have increased by an average of 5% at those three malls compared to 2016, and all three ended 2018 with occupancy of at least 99%.

Most impressively, PREIT has added a number of new retailers and restaurants to the Mall at Prince Georges, just outside of Washington, D.C. These tenant upgrades have driven a surge in sales per square foot from $451 in 2016 to $558 in the most recent 12-month period.

Closing in on the end of a redevelopment phase

In short, there is ample evidence that replacing struggling anchors and bringing in new in-demand tenants can drive substantial growth in sales per square foot. In the long run, that should make PREIT's properties more attractive to potential tenants, leading to stronger rents and higher occupancy levels. The downside of these projects is that they have driven up capital expenditures, leading to elevated leverage and causing some investors to question the sustainability of PREIT's dividend. 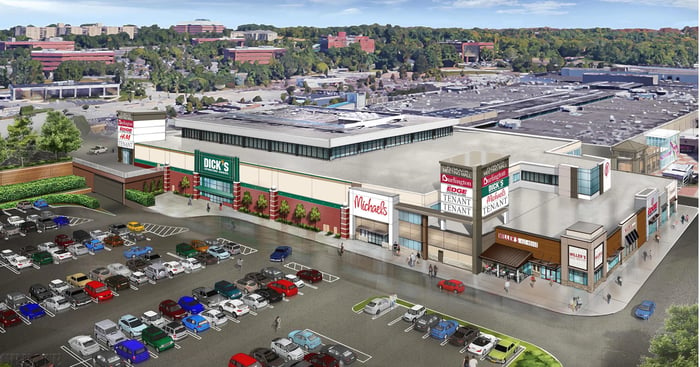 PREIT has spent hundreds of millions of dollars on redevelopment work in the past few years. Image source: PREIT.

Fortunately, PREIT is set to finish most of its current redevelopment projects within the next 12 months. The completely rebuilt (and renamed) Fashion District Philadelphia will have its grand opening on Sept. 19, with more tenants scheduled to open later in the fall or in early 2020.

Two other major redevelopment projects will wrap up in the fourth quarter. Five new tenants will open at Plymouth Meeting Mall in the Philadelphia suburbs to replace a former Macy's, while upscale department store Von Maur and a collection of smaller retailers and restaurants will open at Woodland Mall near Grand Rapids, Michigan.

Several more department store replacements will be completed in the first half of 2020. Most notably, PREIT recently announced that it will proactively replace the Sears store at Dartmouth Mall in Dartmouth, Massachusetts, with a Burlington store and other new retailers. This will leave just four Sears stores in PREIT's core mall portfolio -- and one of those has a substantial amount of space already subleased to Primark.

By this time next year, PREIT will have more or less completed its entire current redevelopment pipeline. Of course, it's possible that more department stores will close in PREIT's portfolio between now and then, but the backlog of redevelopment projects should be much smaller.

PREIT estimates that the new Fashion District Philadelphia development will generate between $11 million and $15 million of net operating income (NOI) next year, almost all of which will be incremental compared to 2019. Committed new leases at other properties -- mainly for its anchor redevelopments -- will add another $11 million to $15 million of NOI.

Thus, NOI could increase by as much as $30 million next year, even with zero growth in the rest of PREIT's portfolio. Considering that management expects the REIT to generate no more than $240 million of NOI this year, that would represent a huge gain.

Furthermore, PREIT expects to raise between $150 million and $300 million over the next two years by selling land parcels at various malls (mainly in the Philadelphia and Washington, D.C. metro areas) for residential development. That will allow it to start reducing its debt load.

Thus, by the end of next year, PREIT is likely to generate significantly more income than today, and its balance sheet should be stronger. This will put the REIT in a good position to respond to the threats it may face in the years after 2020. As a result, the stock continues to look like a huge bargain, which is why I snapped up more shares last week.