Shares of uniform rental giant UniFirst (NYSE:UNF) have gained 31% year to date, and more than a third of that rise came after it delivered its fiscal third-quarter 2019 earnings report on June 26. UniFirst's results featured higher-than-expected earnings and a 5.8% year-over-year increase in organic revenue within the company's core laundry operations segment, which contributes roughly 90% of total annual revenue.

But has the workwear specialist's stock price increased too fast in too short a time? The company now trades at 22 times estimated earnings, and this forward P/E ratio has increased roughly 40% since the beginning of the year.

In addition, even as the company raised full-year revenue and EPS projections alongside its fiscal Q3 results, management inserted an interesting caveat in its earnings release. "Although we are encouraged by the third quarter results which reflect certain positive trends in our operations," said CEO Steve Sintros, "we do want to caution that our profits were favorably impacted by a number of items that may not provide the same benefit going forward."

Sintros was alluding to certain variable costs like healthcare and payroll expenses that have boosted results in recent quarters, but may soon climb to more normal levels. 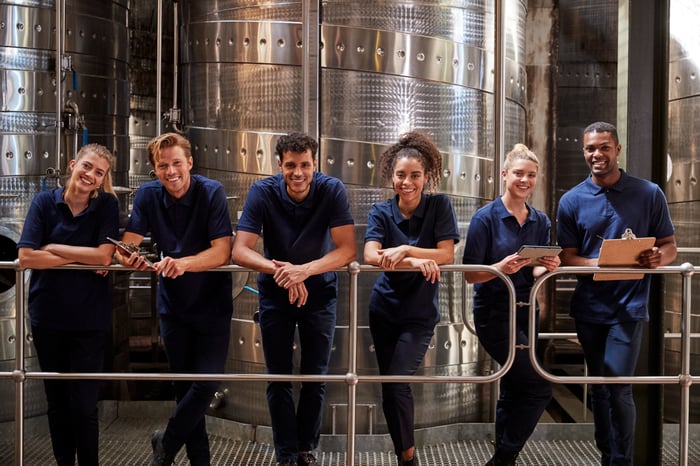 Still, after taking those yellow flags into account, UniFirst stock likely has additional upward potential. This is chiefly because the company trades at a discount to its larger, comparable rival Cintas (NASDAQ:CTAS). Cintas stock has gained 43% itself so far in 2019. Though about four times UniFirst's size -- it booked $6.8 billion in trailing 12-month revenue versus $1.7 billion for UniFirst -- Cintas has managed to expand at a faster pace in recent years.

While Cintas has catalyzed consolidation in the uniform and workwear rental industry of late through its sizable acquisitions, UniFirst has focused on boosting its organic revenue and profitability. UniFirst's core laundry operations segment has notched year-over-year organic revenue improvement of 4.6% in the first three quarters of this fiscal year, and, as noted above, that pace accelerated to nearly 6% in Q3.

This isn't to imply that UniFirst won't entertain the possibility of growth through acquisitions; however, it has employed a relatively nuanced approach that favors bolt-on transactions, rather than huge, transformative purchases that add debt to the balance sheet. In fiscal 2018, UniFirst allocated the modest sum of $42.7 million to business acquisitions.

As I hinted earlier, due to Cintas' faster growth and sterling profitability, the market awards it a premium valuation relative to UniFirst: 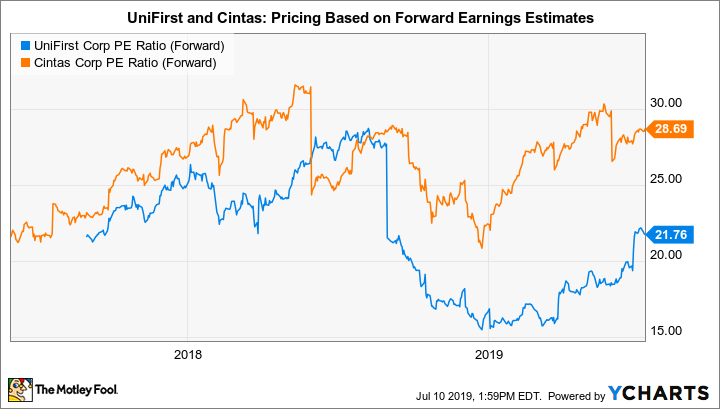 Comparing the two on this simple benchmark of forward P/E ratios makes it clear that despite their steep ascent so far in 2019, shares of UniFirst aren't necessarily overpriced. Indeed, in the context of its  primary competitor's market pricing, they have plenty of room for further appreciation. While UniFirst is now within striking distance of Cintas' yearly organic revenue growth of 7%, it has an enormous opportunity to improve its profitability.

Thus, investors are more likely to reward increasing margins with a higher earnings multiple than to sell UniFirst stock simply to take profits following this sharp year-to-date pop. But as a corollary, to maintain its share price momentum, UniFirst will need to keep its  trend of rising top-line growth and bottom-line improvement intact in the coming quarters.