Please ensure Javascript is enabled for purposes of website accessibility
Free Article Join Over 1 Million Premium Members And Get More In-Depth Stock Guidance and Research
By Beth McKenna - Jul 10, 2019 at 8:03AM

Shares of this Irish biotech could move much higher in late September.

On July 2, Amarin shares surged 16.3% following the company increasing its full-year 2019 revenue guidance to a midpoint of $400 million, up from $350 million. The raise was driven by strong demand for Vascepa, its omega-3 fatty-acid drug derived from fish oil that's currently approved to treat patients with high triglyceride levels.

This demand could be only a start, however, as Amarin and its investors are eagerly anticipating the U.S. Food and Drug Administration's decision on a huge label expansion. In late September, investors should learn whether the FDA has given the green light to Vascepa for the treatment of patients at risk for major adverse cardiovascular events, including heart attacks or strokes.

As background: Amarin stock skyrocketed last September after the company released robust results of its Reduce-It cardiovascular outcomes study. As I previously wrote, "The study showed that Vascepa ... reduced the risk of major adverse cardiovascular events by 25% in patients already taking statin drugs compared to those receiving a placebo, which is a highly statistically significant result." 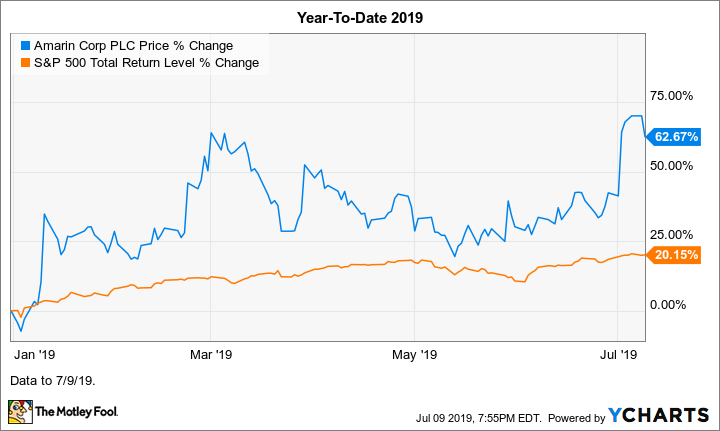 Amarin stock likely got a tailwind in the first half of the year from the strong overall market. That said, we can attribute its outperformance of the market to several catalysts, including:

Take heart, investors: The FDA's decision on Vascepa's label expansion should be less than three months away, in late September. Look for Amarin stock to react accordingly.