Shares of Zoom Video Communications (NASDAQ:ZM) were climbing again last month as the videoconferencing specialist dazzled investors in its first earnings report as a publicly traded company. Those gains were enough to offset a mysterious sell-off later in the month as the stock finished June up 11%, according to data from S&P Global Market Intelligence.

As you can see from the chart below, Zoom surged following its June 6 earnings report, but then gave back some of those gains toward the end of the month. 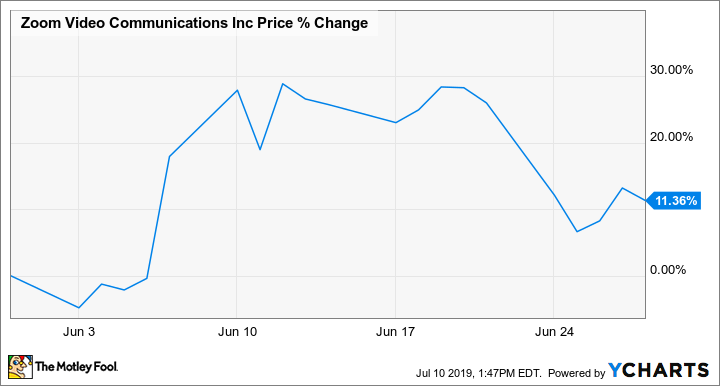 Shares jumped 18.4% on June 7 after the first-quarter earnings report came out. It showed that revenue surged 103% to $122 million, easily besting the analyst consensus at $112 million. Revenue from customers spending more than $100,000 annually jumped 120%, meaning that Zoom is successfully scaling up its customers to higher-value services, a sign of success for software-as-a-service (SaaS) stocks. 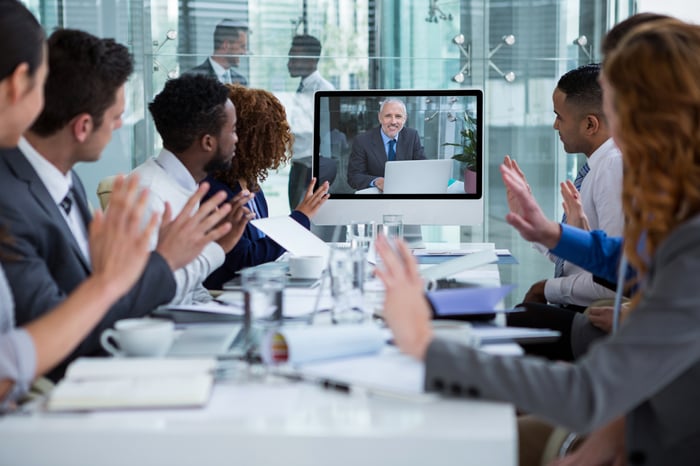 The company also reported a profit of $1.6 million under generally accepted accounting principles (GAAP), better than the $1.7 million loss it reported in the quarter a year ago. And it had adjusted earnings per share of $0.03, up from breakeven a year ago, and beating estimates at breakeven.

Zoom also guided to full-year revenue of $535 million to $540 million, better than the analyst consensus at $526 million.

The stock tacked on another 8.5% in the next session as investor enthusiasm continued to push it higher. But it gave up much of those gains later in the month as it fell 11%, although there was no particular news out on the company. Instead, the stock seemed to fall on valuation concerns along with other recent high-flying IPOs.

To start July, Zoom stock got dinged again as Goldman Sachs issued a sell rating on the company, again on valuation concerns, as analyst Heather Bellini said that market expectations had gotten ahead of themselves. Bellini nonetheless raised her price target from $53 to $66 to account for the stock's massive gains since its April IPO.

Through July 10, the stock is up 4.3% this month and 157% since its IPO less than three months ago. Zoom's growth rate is certainly impressive, but with a market cap already at $25 billion on just $535 million to $540 million in expected revenue this year, it's fair to ask if the stock is now overvalued.