The news might have seemed to be pretty good the last time Boston Scientific ( BSX 3.14% ) reported its quarterly results. In April, the medical device maker announced that revenue rose 5% from the prior-year period while earnings increased by 8%. However, Boston Scientific missed Wall Street's estimates, which caused its stock to fall.

Boston Scientific announced its second-quarter results before the market opened on Wednesday. This time around, there was again both good news and bad news for investors. Here are the highlights of the company's Q2 update. 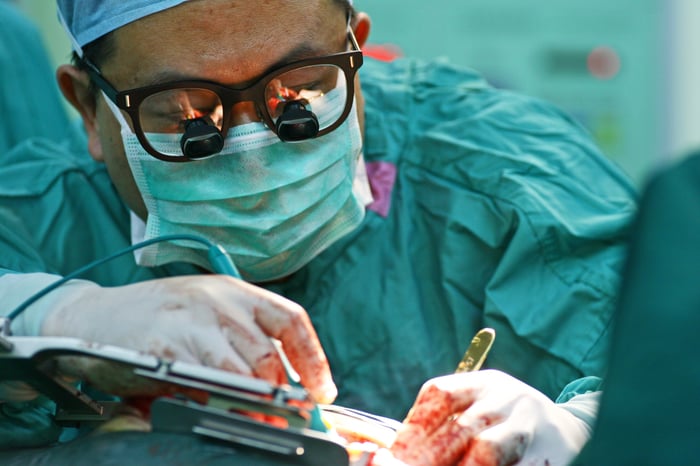 Boston Scientific's top-line performance improved in the second quarter. Revenue jumped 5.6% year over year to $2.63 billion. However, it wasn't enough to meet Wall Street's expectations. Analysts had estimated that Boston Scientific's revenue for Q2 would come in at $2.64 billion.

The company's generally accepted accounting principles (GAAP) net income in the second quarter was $154 million, or $0.11 per share. This reflected a decline from the prior-year period when Boston Scientific announced GAAP net income of $555 million, or $0.40 per share.

On a non-GAAP adjusted basis, Boston Scientific's net income in Q2 was $0.39 per share. This was nearly 4% lower than the year-ago adjusted net income of $0.41 per share. But the company narrowly beat the average Wall Street analysts' estimate of Q2 non-GAAP earnings of $0.38 per share.

CEO Mike Mahoney explained that the growth in revenue was due to the "consistent execution of our global teams." He said that this has helped the business grow at a much faster rate than the market and allowed the company to deliver adjusted earnings per share at the high end of its guidance.

Boston Scientific's revenue increased in all of its operating regions. The strongest growth came in emerging markets, with sales jumping 12% on a reported basis and 20% operationally.

Urology and pelvic health revenue climbed 13% year over year to $348 million. Most of Boston Scientific's other business units delivered growth between 5.6% and 7%. The two exceptions were its cardiac rhythm management and neuromodulation businesses, which posted sales growth of only 0.6% and 1%, respectively.

There were also several key developments for Boston Scientific in Q2, including:

The company's growth prospects hinge largely on introducing new products to the market. This makes Boston Scientific's clinical study for its Acurate neo2 product an important one to watch. Investors will also want to keep their eyes on the company's controlled launch in the U.S. and Europe of the Lotus Edge valve, a minimally invasive TAVR product for patients with severe aortic stenosis.

This Medical Device Maker Will Be Well Positioned Post COVID