Market benchmarks gained on Friday morning after a U.S. Commerce Department report showed the country's gross domestic product (GDP) climbed 2.1% in the second quarter, decelerating from 3.1% three months earlier but arriving slightly above estimates for 2% growth. As of 10:15 a.m. EDT, the Dow Jones Industrial Average (DJINDICES:^DJI) was up 13 points to 27,154, and the S&P 500 (SNPINDEX:^GSPC) jumped 15 points to 3,019.

On the earnings front, shares of Alphabet (NASDAQ:GOOG) (NASDAQ:GOOGL) soared while those of Amazon (NASDAQ:AMZN) fell after the two tech giants released their respective second-quarter reports.

Shares of Alphabet are up 10.1% after the parent company of Google absolutely trounced analysts' estimates for revenue and earnings in its second quarter. 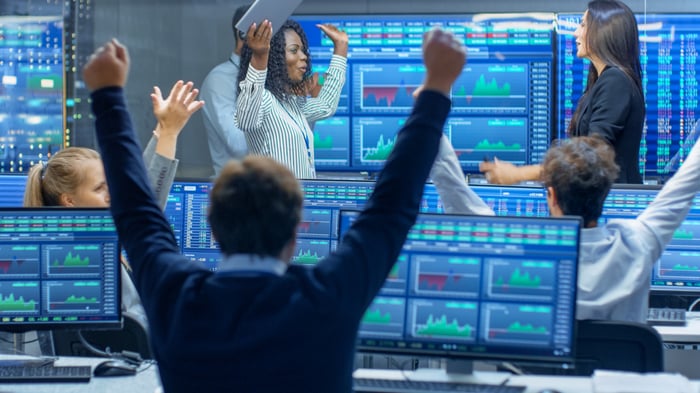 "From improvements in core information products such as Search, Maps, and Google Assistant, to new breakthroughs in AI and our growing Cloud and Hardware offerings, I'm incredibly excited by the momentum across Google's businesses and the innovation that is fueling our growth," Google CEO Sundar Pichai said in a statement.

To be sure, Google's core advertising business remained healthy, with revenue rising 16.1% to $32.601 billion. But its non-advertising revenue also soared nearly 40% to $6.181 billion, helped by momentum from its Cloud products, Google Play, and the launch of its new Pixel 3a smartphone within its hardware segment.

The dark cloud over Amazon

Meanwhile, shares of Amazon are down 2.4% after the e-commerce and cloud computing leader announced mixed second-quarter results.

On the bottom line, however, that translated into net income of $2.625 billion, or $5.22 per diluted share, up a modest 3% from $5.07 per share in the year-ago period. In this case, most analysts were modeling significantly higher earnings of $5.57 per share.

The culprit for its bottom-line shortfall? Look no further than Amazon Web Services (AWS), the company's high-margin cloud-computing business, where revenue climbed "just" 37% at constant currencies to $8.4 billion. That might sound impressive -- and it is -- but investors should note that growth meaningfully decelerated from 42% in the first quarter, and technically missed estimates for a 39% increase.

To be fair, Amazon's core retail operations are thriving as consumers flock to its Prime subscription service. But when a high-margin source of incremental sales like AWS shows signs of slowing growth -- and with shares of Amazon up nearly 30% year to date leading into this report -- it's no surprise to see the stock pulling back modestly today.