There's never a slow month when it comes to Disney (NYSE:DIS), but the month ahead is going to be particularly newsworthy. From a major theme park expansion project to quarterly results to even a rival with a potentially bar-raising announcement, August is going to be jam-packed with investor-relevant news.

Disney is closing out July hitting all-time highs, but will the same be true at the end of August? Let's go over some of the dates that Disney investors will want to keep an eye on in the month ahead. August will not be boring. 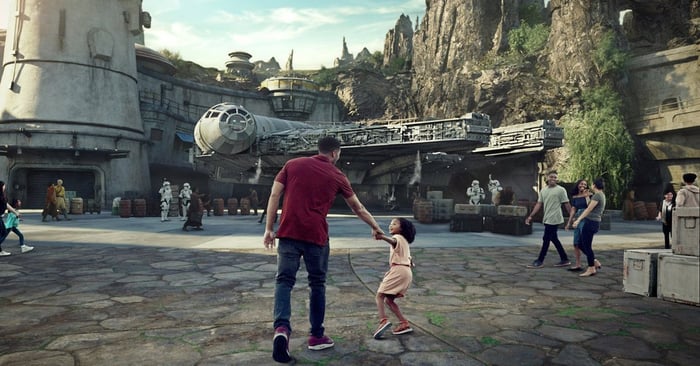 The month will kick off with its biggest theme park rival peeling back the curtain on some of its future theme park plans. Comcast's (NASDAQ:CMCSA) Universal Orlando will be making an "epic" announcement on Thursday, and all of the buzz suggests that it's ready to unveil upcoming rides and attractions including plans for a brand-new theme park.

Comcast is no stranger to Disney, and 15 years ago, it even made a $54 billion offer to buy the House of Mouse. Now the company best known for its cable and broadband service is trying its best to take on Disney through media networks, content, and theme parks. Comcast's Universal Orlando started closing the gap with Disney when it opened The Wizarding World of Harry Potter in 2010, but Disney's the one growing faster over the past couple of years. Expanding its reach with a new theme park and several new hotels could possibly eat into Disney's theme park business, even if any new project would likely take several years to debut.

Disney will deliver its fiscal third-quarter results next week. It's going to be Disney's first full quarter since the mid-March closing on its acquisition of key Fox assets, so naturally the top-line surge is going to take some investors by surprise. Analysts see revenue soaring 41% to $21.49 billion, and the lion's share of that gain is going to be the incremental impact of the Fox content it didn't have a year earlier.

Wall Street sees the bottom line going the other way, with earnings per share of $1.75 falling short of the $1.87 it posted during the fiscal third quarter of 2018. Disney has beaten analyst profit targets in each of the past three quarters, but there are a lot more moving parts to next Tuesday afternoon's report than usual.

Disney's busy movie production studio was going to take August off, and with The Lion King's strong second week, it's easy to see why as it now has this year's five highest-grossing films. The Fox deal changes things, and that means two smaller-profile flicks hitting the local multiplex in August.

The feel-good dog movie The Art of Racing in the Rain hits theaters next weekend. The twisted newlywed hunting flick Ready or Not opens two weeks later. Both movies came over as part of the Fox deal that closed earlier this year.

Four weeks after rival Comcast makes theme park waves, Disney World opens Star Wars: Galaxy's Edge. The 14-acre expansion at Disney's Hollywood Studios is the resort's most ambitious addition in 21 years. This will only be the first phase, but all that remains to open is the Rise of the Resistance attraction that will open in early December.

A similar expansion opened at Disneyland two months ago, and while traffic and wait times have been surprisingly light, there it should be a different story in Florida. Disney World attracts far more visitors, and it also has a lot more on-site resorts to keep visitors close. Disney is so confident of the appeal of Star Wars: Galaxy's Edge at Disney's Hollywood Studios that it will open the new land three hours early for hotel guests through the months of September and October.