Hess (NYSE:HES) sold off a boatload of assets in recent years to narrow its focus on its best areas.

While that decision has weighed on the oil company's near-term results, it's set up to deliver healthy growth in the coming years. That bright future started showing signs of emerging during the just-completed second quarter, which suggests that it's getting close to hitting an inflection point.

*Difference for production is calculated from the midpoint of guidance. Data source: Hess. BOE/D=Barrels of oil equivalent per day.

Hess' production surged 10% year over year, thanks to a 23% increase from the Bakken shale. Overall, output in that region averaged 140,000 BOE/D, which came in at the high end of the company's 135,000-140,000 BOE/D guidance range. That helped partially offset some weakness in the Gulf of Mexico due to unplanned maintenance at a third-party platform. That issue reduced output at the Conger field by 4,000 BOE/D during the quarter, which was why the company's total production came in slightly below the midpoint of its guidance range.

While the Bakken was Hess' main growth driver during the second quarter, offshore Guyana is set to become its main fuel starting next year. The field, operated by ExxonMobil (NYSE:XOM), is on track to start producing from its first phase in the first quarter of 2020. The companies have already approved a second phase that will deliver first oil by mid-2022, and have a third one in development that could start up as early as 2023.

Meanwhile, Exxon has had continued success in discovering oil there. It completed two more exploration and appraisal wells during the quarter, which both encountered oil. Exxon now believes that it can recover more than 6 billion barrels of oil equivalent resources from the region. In addition, it estimates that there may be billions of barrels in additional resources. That's why the partners are adding another drillship later this year, bringing their total up to four as they continue looking for more oil in the region. 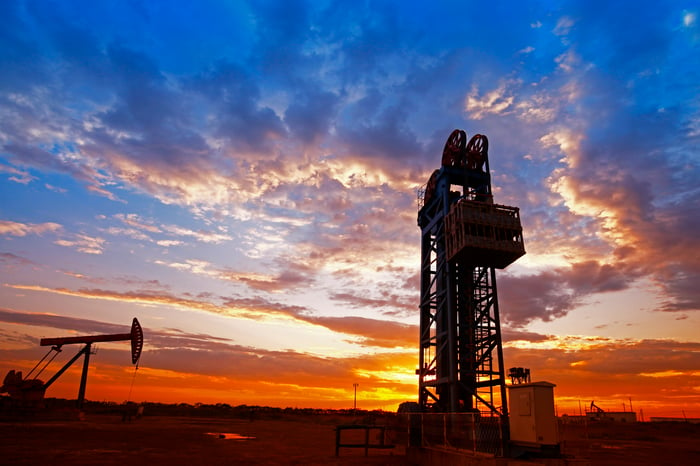 Hess' solid results so far this year have made it even more optimistic about what's ahead, so it's boosting its full-year guidance. It now expects to produce between 275,000 and 280,000 BOE/D this year, which is a 5,000 BOE/D increase of the bottom end of its initial range. That's due to its view that it will produce 140,000-145,000 BOE/D out of the Bakken, which is also a 5,000 BOE/D increase of the low end of its initial range. The company can deliver this improved production profile even while spending less money, so it's reducing its capital budget by $100 million to $2.8 billion.

The company's progress in the second quarter keeps it on track with its long-term growth plan. Thanks to its focus on the Bakken and Guyana, Hess continues to anticipate that it will grow its production and cash flow at 10% and 20% compound annual growth rates, respectively, through 2025. That forecast sets Hess up, beginning next year, to start generating significant free cash flow; it could use that to buy back stock or boost the dividend.

Hess' Bakken shale growth engine kept shining brightly during the second quarter. Strong drilling results in that region now have it on track for an even better year. Not only is production growing faster than expected, but it's also spending less money.

Meanwhile, its future growth engine in Guyana continues to get bigger, setting Hess up for many years of success.