Revenue up 17%. Adjusted earnings per share up 40%. That was the great news for shareholders when Amedisys (NASDAQ:AMED) reported its quarterly earnings in April. The question for investors heading into the second quarter was whether Amedisys would be able to improve on its previous results.

That question was answered when the home health and hospice provider released its Q2 report before the market opened on Thursday. Here's what you need to know from Amedisys' quarterly update. 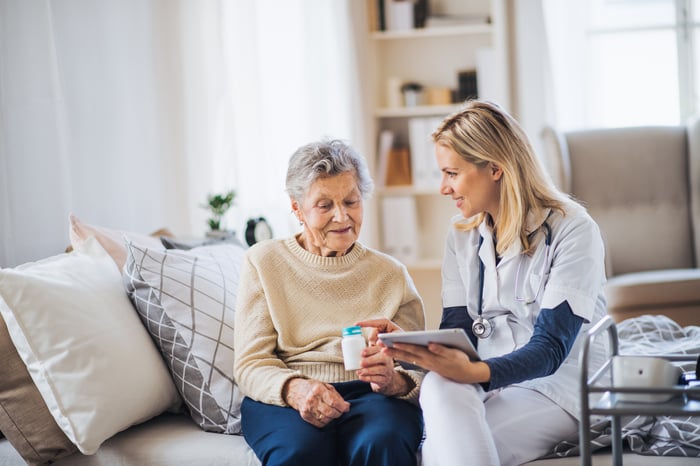 Amedisys announced Q2 revenue of $493 million, a 20% increase from the $411.6 million reported in the same quarter of the previous year. This amount was also slightly higher than analysts' average revenue estimate of $492.98 million.

The company's net income as reported under generally accepted accounting principles (GAAP) came in at $33.7 million, or $1.02 per share. This was an improvement from Amedisys' GAAP net income in the prior-year period of $33.3 million, or $0.98 per share.

The company's bottom line improved in part because of the strong overall revenue growth. However, higher operating expenses offset much of the revenue gain. Amedisys' non-GAAP adjusted earnings figures looked much better compared to the prior-year period primarily because of adjustments related to acquisitions and planned closures.

It should be noted, though, that Amedisys' full-year outlook doesn't factor in any acquisitions. The company recently announced plans to acquire additional home health services in Westchester, Bronx, and New York counties in the state of New York.