Despite a slowdown for the RV component manufacturer, the future still looks bright.

In a world in which innovation often concentrates on technology, it might seem almost delightful that recreational vehicles are back in vogue. With other travel options remaining expensive even as gasoline prices stay relatively low, RVs are a cost-effective way for a new generation to have the vacations they want. LCI Industries (LCII 0.40%) makes sure that RVs have the best features, with parts and components that meet RV owners' needs.

Coming into Tuesday's second-quarter financial report, though, LCI investors weren't sure whether a recent slowdown in the RV segment might hurt results, and they feared declines in both revenue and earnings. LCI's top-line growth did indeed disappear once again, but strong bottom-line performance made investors feel more comfortable about the RV component maker's future.

LCI Industries' second-quarter results were mixed in most investors' eyes. Sales of $629.1 million were down 8% from the year-ago quarter, which was slightly worse than the 6% top-line decline that most of those following the stock were expecting to see. However, net income managed to inch upward by a fraction of a percent to $47.5 million. That worked out to earnings of $1.89 per share, and that was far better than the consensus forecast among investors for $1.67 per share on the bottom line. 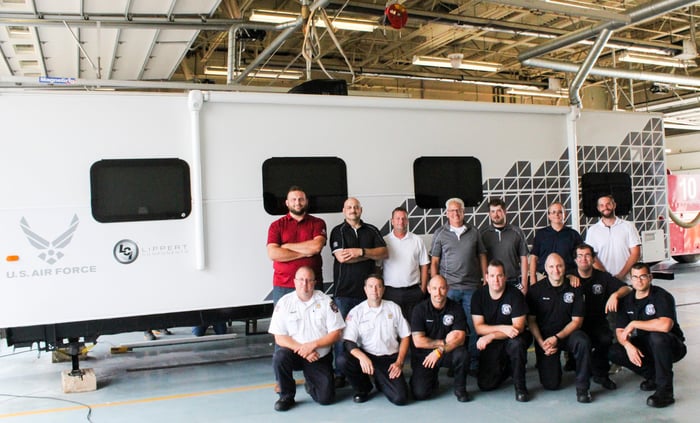 From a sales perspective, all of LCI's weakness came from the original equipment manufacturing RV segment. Revenue from OEM travel trailers and fifth-wheels was down sharply, off 14% from year-ago levels. Motor home sales were even weaker, with a 16% decline affecting the company's top line. LCI noted that the RV industry is in the late stages of a correction; inventories are seeing huge reductions as retailers adapt to shifts in consumer demand and available vehicles.

However, LCI got a boost from other areas of its addressable market. In the aftermarket, revenue jumped 12%, largely because the rush of RV sales in recent years has increased demand among longer-time RV owners to get upgrades and replacements on original parts and systems. Meanwhile, OEM sales in adjacent industries, like marine, equestrian trailers, cargo, and other related applications, were up a fraction of a percent year over year, showing the wisdom of the diversification strategy that LCI has followed.

Operating profit was higher by 2.4%, and all the growth came from aftermarket, where the bottom line saw gains of 24%. OEM segment profit overall was down about 2% from year-ago levels.

LCI still saw growth in its share of RV value. The company's products account for $3,486 on average for every travel trailer and fifth-wheel RV, up $74 from year-ago levels. On the motor home side, averages rose $30 to $2,468 per vehicle.

What's ahead for LCI?

CEO Jason Lippert was happy with how things went. "While the North American RV market remains challenging," Lippert said, "our diversification strategy continues to generate solid momentum." The CEO noted that in addition to wider addressable markets, LCI also made moves to be more efficient and cut costs.

The future also looks bright. LCI has a three-part strategy to foster growth. It intends to accelerate its merger-and-acquisition activity, with the recent announcement regarding Lewmar and Lavet boosting international opportunities. It believes that there are good M&A targets that can immediately add to earnings. LCI is also looking at ways to win market share, with target areas including markets adjacent to RVs as well as the aftermarket segment for RV parts and components. Europe is also a key target for international growth. And finally, LCI expects to cut back on leverage and return more capital to shareholders.

Investors were generally content with the results, and the stock climbed 3% on Tuesday following the announcement. There's still some work left to do before the RV industry can recover fully, but LCI looks like it's on the right road to a full turnaround for the company and the industry as a whole.

Is the RV Boom Slowing Down? Not According to LCI