It's often difficult to parse out the earnings of Arcos Dorados Holdings (NYSE:ARCO), the world's largest McDonald's franchisee. The company's restaurants are based in Latin America and the Caribbean, and it has a significant presence in highly inflationary economies like Argentina and Brazil, and even the moribund economy of Venezuela.

Since the company reports in its home currency of the U.S. dollar, its results often suffer from outsize foreign-currency translation impacts. But as Arcos' latest filing shows, the organization is making steady progress in its goal to improve overall margins.

(Note that in the discussion that follows, all comparative numbers refer to those of the prior-year quarter.)

What happened with Arcos Dorados this quarter? 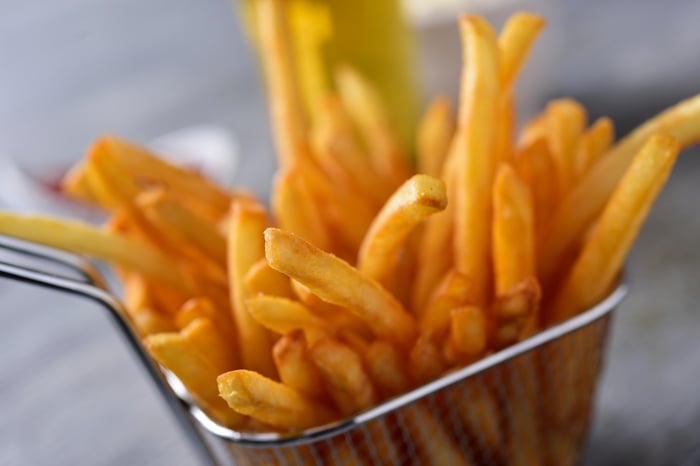 In Arcos Dorados' earnings press release, new CEO Marcelo Rabach outlined numerous factors behind the company's improved margins. Interestingly, most of these are related not necessarily to cost discipline but to service and revenue-based initiatives:

Our Cooltura de Servicio [Culture of Service] program, together with higher customer satisfaction surveys scores, were among the key drivers for our strong results in the quarter. Significant contributors to the 14.2% and 25.1% increases in comparable sales and constant currency adjusted EBITDA, respectively, were also the continued success of our marketing and promotional campaigns, strong menu offerings, delivery, as well even greater sales lift coming from our Experience of the Future ("EOTF") restaurants. Digital service features and our affordability platform, which also comprise our unmatched omnichannel guest experience, continued to drive higher revenues as well.

Given the strong success of EOTF restaurants at further differentiating our market-leading brand in Brazil, Argentina, Uruguay and Chile, we are planning to introduce this format in six additional countries before the end of this year, flexibly deploying capital where we see the greatest growth opportunities within Arcos Dorados' dominant geographic footprint.

Arcos Dorados doesn't provide forward earnings guidance. However, on the company's earnings conference call, management discussed one revenue driver that should positively impact the back half of the year: delivery services. Like McDonald's, Arcos is seeing rapid uptake of delivery by customers as it rolls out the service. The organization now has delivery available in 11 Latin American markets, at over 1,100 stores.

Management relayed this quarter that the effort is exceeding initial expectations. Delivery sales tend to add incremental profits to the bottom line, and as such, they represent another tool that Arcos can utilize in its steady march to higher profitability. Shareholders will likely hear more on this subject when the company next reports in early November.