Disappointing fourth-quarter results are taking a toll on the medical device stock.

Shares of Accuray (ARAY 0.87%) were nosediving 11.3% as of 11:33 a.m. EDT on Friday. The big drop came after the radiation oncology systems maker reported disappointing fiscal 2019 fourth-quarter results after the market closed on Thursday.

Accuray narrowly topped Wall Street estimates with revenue of $117.4 million in the fourth quarter. However, the company's net loss of $0.02 per share was worse than the $0.01-per-share net loss that analysts expected. Accuray also provided revenue guidance for full-year 2020 that was lower than anticipated. 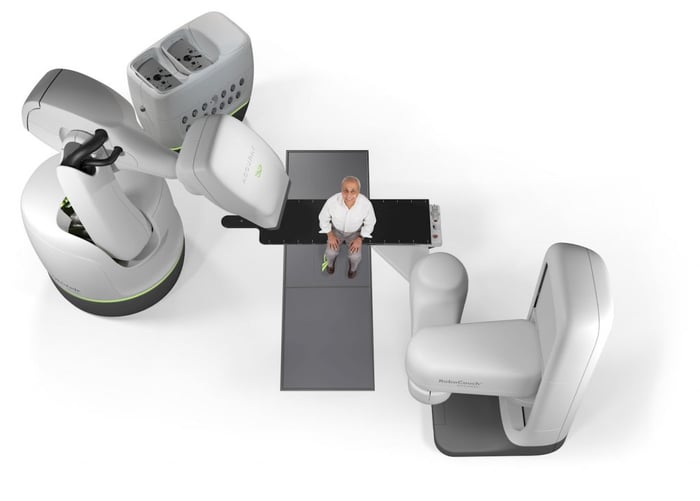 One disappointing quarter usually shouldn't rattle investors with a long-term perspective. The exception to this is when the quarterly update reveals problems that could persist over a long period of time. But it's uncertain if that's the case for Accuray.

The company's bottom-line miss stemmed from two main factors: lower gross margin and a bigger impact from income taxes. Neither of these factors should be worrisome to long-term investors.

Accuray reported a lower gross margin of 39.1% in Q4 compared to 42.2% in the prior-year period. In the company's Q4 conference call, CFO Shig Hamamatsu attributed this decline to a lower mix of CyberKnife systems. However, he also noted that there was double-digit percentage order growth for CyberKnife in fiscal 2019, a trend that should drive revenue growth (and improved gross margin) in the new fiscal year.

The company also recorded $864,000 as a provision for income taxes in the recent quarter. Accuray received an income tax benefit of $411,000 in the prior-year period. This resulted in a swing of nearly $1.3 million on the bottom line, but it's nothing that should concern long-term investors.

China's tariffs and general uncertainty over trade relations between the U.S. and China continue to weigh on Accuray, however. These factors impacted the company's fiscal 2020 revenue guidance. If higher tariffs are imposed or a trade war escalates, Accuray would feel the sting.

Accuray could benefit from proposed reimbursement changes by the Centers for Medicare and Medicaid Services (CMS). In July, the federal agency announced a new radiation oncology alternative payment model. This new model is expected to be implemented in the first half of 2020 and will be tested over a five-year period.

However, with continued U.S.-China trade tensions, investors can probably expect more volatility with Accuray stock for the immediate future.