Please ensure Javascript is enabled for purposes of website accessibility
Log In Help Join The Motley Fool
Free Article Join Over 1 Million Premium Members And Get More In-Depth Stock Guidance and Research
By Dan Caplinger – Aug 20, 2019 at 10:45AM

Major benchmarks moved lower on Tuesday morning, giving back some of Monday's gains. Investors tried to evaluate the likely course of future economic performance, with many looking at the Federal Reserve to provide even more monetary accommodation toward supporting growth. As of 10:30 a.m. EDT, the Dow Jones Industrial Average (^DJI -0.74%) was down 56 points to 26,079. The S&P 500 (^GSPC -0.55%) lost 10 points to 2,913, and the Nasdaq Composite (^IXIC 0.01%) fell 18 points to 7,985.

Earnings season is largely over, but a few well-known companies just reported their latest results. Home Depot (HD -1.38%) saw its stock rise after releasing its second-quarter financials, while Kohl's (KSS -2.95%) gave up ground. Yet both companies had something to say about the health of the U.S. consumer economy and what it means as the key holiday season approaches.

Shares of Home Depot gained 4% after the home improvement retailer's earnings proved better than many had anticipated. Despite some concerns about the impact of trade tensions and other factors on sales, Home Depot also believes that it should be able to maintain its bottom-line performance in the second half of 2019. 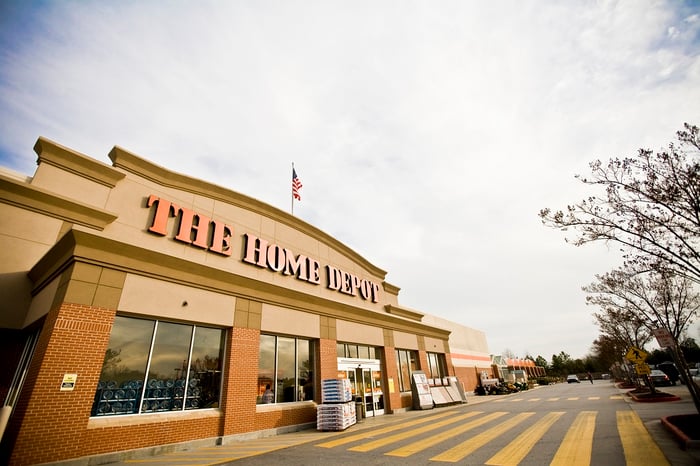 Home Depot's results were solid. Revenue climbed 1% from year-ago levels, and even though net income fell slightly year over year, a big reduction in the number of outstanding shares helped send earnings per share up 4%.

The home improvement retailer saw comparable-store sales rise 3%, climbing somewhat from the most recent quarter but still remaining below typical levels over the past several years. Flat customer traffic played a role in holding back sales growth. Moreover, CEO Craig Menear pointed to the potential for new tariffs to hurt results, and falling lumber prices are also weighing on the retailer.

Home Depot therefore cut its sales projections for the full year, but it still believes it'll make good on its earnings expectations. Investors seem focused on the bottom line, and as long as Home Depot can find a way to keep making money even in a sluggish sales environment, the stock could remain healthy.

Kohl's pushes toward a turnaround

Department store retailer Kohl's didn't have quite as good luck, seeing its shares fall 4% Tuesday morning. Kohl's continued to face pressure during the second quarter of 2019, but it's hopeful that it can avoid some of the difficulties that have hurt its retail peers lately.

Results from the department store retailer looked weak. Revenue fell 3% on a 2.9% drop in comparable sales, and adjusted net income was down 15% from year-ago levels. Despite efforts to rein in costs, overhead expenses were largely flat, putting pressure on operating income.

Yet Kohl's tried to stay positive. CEO Michelle Gass noted that comps turned positive in the final six weeks of the quarter, and back-to-school season is going well. Gass hopes that the combination of new brand launches and greater traffic from the company's partnership with Amazon.com in handling returns for the e-commerce giant will keep Kohl's moving forward.

Investors don't seem as certain, however. In the long run, Kohl's will have to establish that it can boost sales of goods without relying on discount promotions. Efforts to maximize its real estate value could also give the company an edge, but shareholders need to be prepared for a long process for it to mount a full recovery.