After a quarterly report that wasn't as terrible as expected, shares of the high-end retailer were climbing.

Shares of Nordstrom (JWN -2.23%) were gaining today after the well-to-do department-store chain posted an earnings report that, while troubling, was still better than the market had anticipated. Considering how far Nordstrom shares had fallen this year, investors seemed to take the opportunity to bid up shares of the turnaround play as its bottom-line result was significantly better than expected. 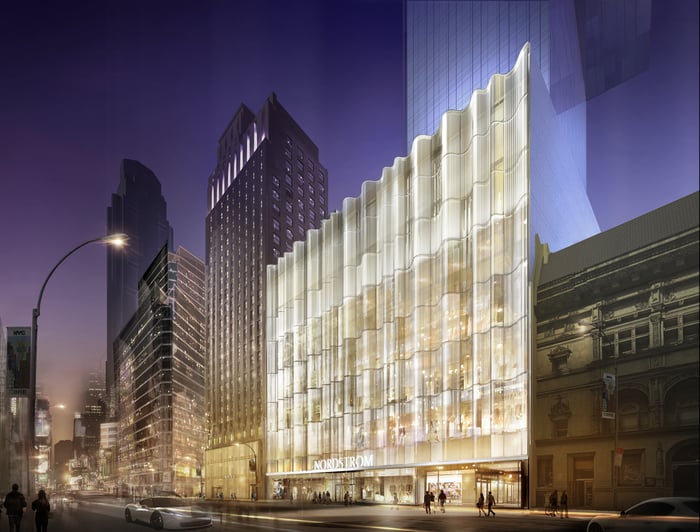 The company said earlier this year that it would no longer report comparable sales, stating that net sales were a fair proxy. However, a 5% slide in comps for a retailer that's supposed to be well-positioned these days is a tough pill to swallow and doesn't bode well for the company's near future or its overall strategy and execution.

Where Nordstrom did shine, at least relatively speaking, was on the bottom line as diluted earnings per share slipped from $0.95 to $0.90, but still beat the analyst consensus of $0.75. Nordstrom has been aggressively buying back stock over the last year as shares have tumbled, and its share-repurchase program helped compensate for a 13% decline in net income to $141 million.

We delivered strong bottom-line results, demonstrating our inventory and expense discipline. We exited the quarter in a favorable inventory position and made important strides in productivity. We're focused on driving our top-line, and while this can take time, we are confident in our ability to manage through cycles.

Nordstrom also cut its outlook for the year, which makes the stock's jump even more strange. The company now sees net sales falling 2% compared to a previous range of negative 2% to flat. It also trimmed its earnings-per-share forecast to $3.25-$3.50 from $3.25-$3.65.

Nordstrom has some positive catalysts to look forward to, including the opening of its flagship store in New York this October, but the latest results paint a fundamentally weak picture of the company. Sales fell at both of its full-price and off-price segments, and digital sales only grew by 4%, a disappointing pace for a channel that's become a much-needed growth engine for nearly every retailer.

Even with today's jump, Nordstrom stock is down 50% over the last year. To recover those losses or at least most of them, the company will have to show progress on the top line, and that includes a return to growth at some point.