Specialty retailer Conn's (NASDAQ:CONN) reported record quarterly earnings per share in its fiscal second quarter of 2020, in results released before markets opened on Tuesday. The furniture, appliances, and consumer credit chain also signaled imminent relief from a weight on comparable-store sales. We'll discuss the all-important metric of comps below, along with other crucial details from the quarter. Note that all comparative numbers that follow refer to those of the prior-year quarter.

What happened with Conn's this quarter? 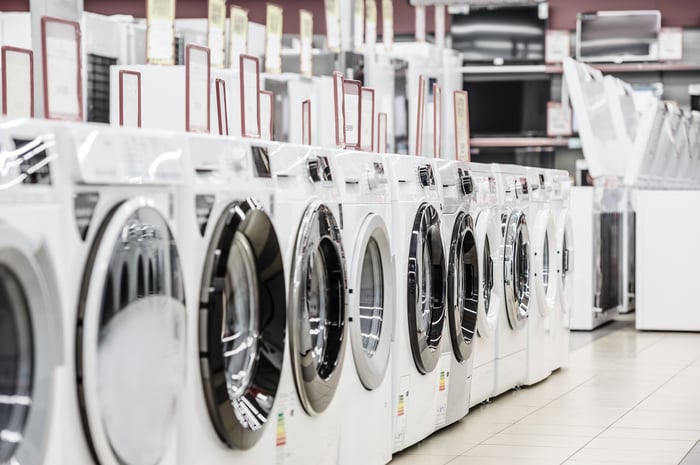 In Conn's' earnings press release, CEO Norm Miller detailed factors behind the company's performance, and pointed to significantly higher comps in the coming quarters. Miller also announced Conn's plans for expansion into a vibrant market. This information, along with strong earnings and a healthy outlook, propelled shares 18% higher in the afternoon trading session on Tuesday, as investors warmed to its viability as a consumer goods investment for the back half of the year. Miller said:

Retail sales growth as a result of new store openings, strong retail profitability, and favorable credit performance drove record second-quarter earnings of $0.62 per diluted share. Our e-commerce sales are quickly ramping, and we are well positioned to serve our customers online as we expand our geographic footprint. During the second half of this fiscal year, we expect to lap the benefits Hurricane Harvey rebuilding efforts had on same-store sales, which have impacted the year-over-year sales comparison over the past four quarters.

With strong operating performance and financial results, I am excited to announce our plans to enter the Florida market next fiscal year. We believe that the State of Florida can support over 40 Conn's HomePlus locations once fully penetrated. Positive momentum is accelerating across our business, and we believe fiscal year 2020 is shaping up to be a year of strong earnings and operational growth.

Consumer segment revenue is pegged to land in a range of $94 million to $98 million. Conn's doesn't provide forward EPS or net income guidance, but it does outline expected SG&A expense, which should fall between 32.25% and 33.25% of total revenue next quarter.