There is plenty of action in after-hours trading, thanks in no small part to late-breaking news that's affected some notable stocks.

One of these is e-commerce company Shopify (NYSE:SHOP). Another is fast-food mainstay Wendy's (NASDAQ:WEN), which is about to ramp up its efforts to take early morning market share from rivals. 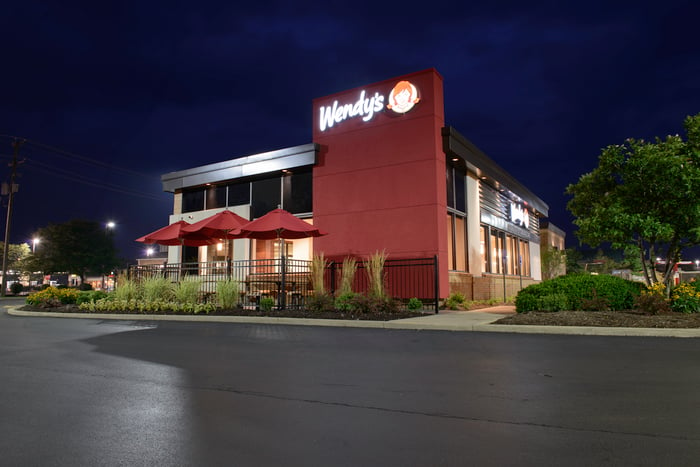 Shopify is spending big in the checkout lane. The retail tech stock announced after market close today that it has reached an agreement to buy 6 River Systems. The price is $450 million, which will be effected with a mix of cash and Shopify stock at the ratio of roughly 60% to 40%.

6 River Systems is a privately held company that develops automation solutions for the warehouse. Its money product is a "collaborative robot" whimsically named Chuck that guides humans around the floor to the precise location where an item or items have to be picked for an order. The company, which was founded in 2015, counts Office Depot and Lockheed Martin among its clients.

In the press release trumpeting the deal, Shopify said that "[a]dding 6 River Systems' cloud-based software and collaborative mobile robots... to the Shopify Fulfillment Network will increase the speed and reliability of warehouse operations, by empowering on-site associates with daily tasks, including inventory replenishment, picking, sorting and packing."

Chuck and his team will contribute around $30 million in annual billings to its new owner's top line in 2020, Shopify said. For this year, 6 River Systems should have "no material impact" on revenue. The acquisition is expected to increase the company's 2019 expenses by around $25 million in total.

Shopify anticipates that the deal will close in Q4 of this year. Although it's a sensible and very complementary move, investors might be somewhat concerned with the price tag and the immediate impact on costs -- tonight, Shopify's stock is essentially trading sideways.

Wendy's rolling out breakfast in all U.S. restaurants

A new front has opened in the long-running Breakfast War. Wendy's announced tonight that it will roll out its breakfast menu throughout the fast-food restaurant operator's "U.S. system" next year. Currently, only around 300 Wendy's offer the morning menu; all told, as of the end of June the company's total U.S. restaurant count was nearly 6,200.

In the press release announcing the move, Wendy's wrote that the initiative "provides incredible growth opportunities. We are well-positioned to pursue it."

Naturally, such a large-scale rollout requires investment. The company is estimating that it will incur around $20 million in costs, not least because it plans on hiring around 20,000 new workers to help with the effort.

Wendy's said it would update its expectations for 2020 and beyond at its Investor Day scheduled for Oct. 11.

Although going all in on the breakfast segment is a smart decision, Wendy's is late to this party. McDonald's (NYSE:MCD) and Yum! Brands' Taco Bell, to name two big breakfast success stories, shifted into morning mode years ago. Now it'll be harder to carve out share, particularly when going against the likes of McDonald's and its extensive restaurant network, not to mention other egg slingers.

It's tough to beat McDonald's at the early morning game -- not least because the giant rival offers certain breakfast menu items all day -- and that's only the tip of the competition iceberg. Perhaps because of this, Wendy's stock is trading down by 5% in after-hours action.