E-signature leader DocuSign (NASDAQ:DOCU) soared more than 21% last week, after it reported second-quarter earnings. As you may have guessed, the numbers were impressive. The software-as-a-service company posted strong 41% revenue growth and even more impressive 47% billings growth in the quarter. Those numbers exceeded last year's growth rates, as well as those of the previous quarter.

Not only is accelerating growth a great sign, but it's also a big positive when billings exceed revenue growth. Billings takes into account contracts that have been agreed to and billed already, but which haven't yet been recognized as revenue, so when billings growth is higher than revenue growth, it portends more strong growth ahead.

Other impressive metrics include a net expansion rate of 113%, meaning existing customers increased their spend with DocuSign by 13% relative to last year. The company also expanded its customer base by 25%, with higher-value enterprise and commercial customers growing an even higher 31%. The number of contracts with annual value over $300,000 grew even faster than that, at a 50% clip. 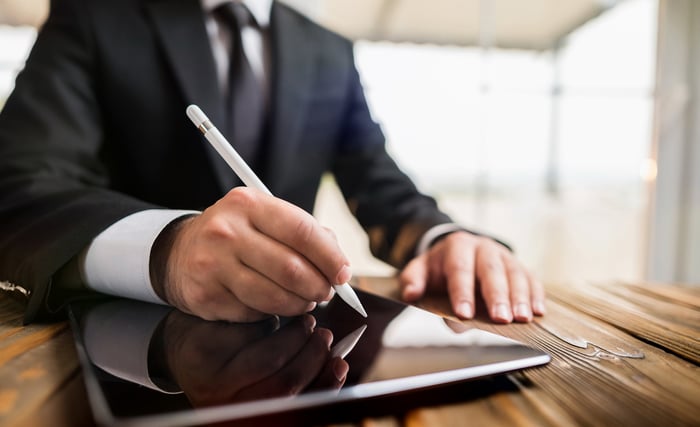 The leader continues to innovate

What caused the acceleration? Well, DocuSign has been executing quite well, but its growth was also aided by last year's $220 million acquisition of Spring CM, which is a contract lifecycle management software. Earlier this year, DocuSign incorporated Spring CM's offerings with its own dozen or so products, as well as over 350 third-party integrations into something called the DocuSign Agreement Cloud. Having all of DocuSign's products and third-party integrations under one software platform is clearly showing benefits for customers, as seen in the company's accelerating revenue growth.

DocuSign has found so much success because it's the clear first mover and leader in the space, and its solutions greatly speed up transactions and save costs for customers. The old process of sending and signing contracts is one of the last business processes to be automated, because of its importance; however that's beginning to change, as the technology to execute document signings has improved, and the cost savings are too compelling to ignore.

For instance, DocuSign management pointed to one leading energy company that is saving tens of millions of dollars by having switched to DocuSign's eSignature and CLM solutions under the agreement cloud. Management also pointed to two big milestones in the quarter -- the company's new offering tailored specifically for signing and executing mortgages, as well as its first wins in the government space. Both mortgages and government uses are very large opportunities, and also stand to benefit greatly from the efficiencies of e-signatures and document-tracking.

One of the dangers of high-flying software stocks is that they tend to trade at high multiples, don't generate meaningful profits, and may be subject to competition. However, DocuSign appears to compare favorably here to other software stocks, meaning it could make for a good buy, even up 20%.

For instance, while DocuSign isn't profitable on a generally accepted accounting principles (GAAP) basis, it did generate positive operating cash flow of $72 million and free cash flow of $42 million in the first half of the year, up 91% and 56%, respectively. Therefore, it's still generating cash with which to reinvest in the business or make other bolt-on acquisitions, such as Spring CLM. In addition, even after the recent surge, DocuSign trades for a price-to-sales ratio just under 12, which, while not cheap, isn't nearly as expensive as some other high-growth cloud software stocks.

And while analysts did ask about competition from the likes of Adobe (NASDAQ:ADBE) and Dropbox (NASDAQ:DBX), DocuSign is still the clear leader in the space, with a dominant 60% market share. Not only do category-defining leaders tend to keep on winning, but that $25 billion addressable market is large enough, and with the switch to eSignatures early enough, that there should be room for more than one winner.

While DocuSign is up a lot in recent days, the stock is still well below the all-time highs set last summer. Though it operates in a pretty unexciting business of document signatures, and may not be as cheap as it was a week ago, I think the stock can still deliver exciting long-term returns for investors as the undisputed leader in its niche.