The cruise giant might lower its profit outlook for the third straight time in its upcoming earnings report.

There's no shortage of worries on investors' minds heading into Carnival's (CCL -1.96%) second-quarter earnings report. The cruise ship leader has been trailing peers like Royal Caribbean this year by posting sluggish growth trends. It lowered its outlook in each of the last two quarters, in fact, and might do so again in the upcoming report.

That market share challenge has been compounded by spiking fuel costs and an active hurricane season, with both factors threatening to impact results during the second half of the fiscal year. Let's take a look at what investors might expect to see from the cruise specialist this week. 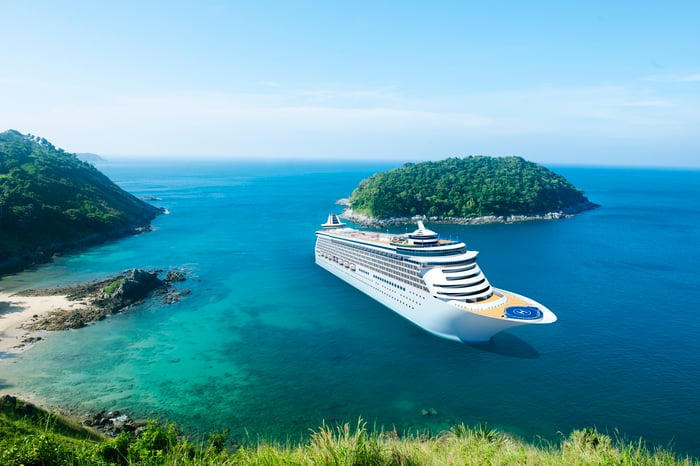 Executives weren't optimistic back in late June that this positive momentum would continue into the fiscal third quarter. Instead, they projected that net revenue yields would be flat or decline slightly due to soft demand in its European and Asian sailings. Investors can add the disruption around Hurricane Dorian to that list of challenges, given that the storm approached key Caribbean ports near the end of the quarter.

We'll find out this week whether Carnival was able to navigate these growth challenges and keep its sales rate steady. Looking behind the top-line figure, investors will want to see more signs of solid cruise demand overall, which include rising ticket prices, higher onboard spending, and occupancy bookings of over 100%.

Carnival can't do much about fuel cost volatility, which impacts all of its competitors just the same. That's why the company tracks its costs excluding fuel, since that metric provides a clearer picture of its profitability trends.

The consumer discretionary company outperformed on this metric last quarter, too, but again investors have reasons to expect a worse showing in the upcoming report. Excluding fuel and currency exchange swings, costs are set to rise by between 0.5% and 1.5% this quarter, executives projected back in June. The main factors behind this jump include disruptions from the loss of Cuba as a sailing destination and technical problems with one of Carnival's cruise ships. The company likely succeeded in shifting most of its vacationers around to other sailings, but these interruptions probably pulled margins lower during the quarter.

Is another downgrade in the cards?

Any updates Carnival makes to its full-year outlook are likely to spark intense reactions on the part of investors. As it stands today, the company sees net yields holding flat to mark a sharp slowdown from the prior year's 4% increase.

Hitting that result wouldn't be a big disappointment considering the vacation specialist enjoyed back-to-back record years in 2018 and 2017. Management has been predicting a moderating growth rate, too, as the company leans more heavily on increasing capacity rather than on boosting revenue per sailing.

The outlook stands in stark contrast with Royal Caribbean, though, which is expecting 8% growth this year. The gap between those two numbers helps explain why Carnival's stock is in slightly negative territory in 2019 while Royal Caribbean's has closely tracked the broader market's near-20% rise.