Investors in retirement or close to it often look to dividend stocks to provide a steady source of income without having to sell shares when the market is on a downswing. But retirees should be planning an investment strategy that will support them into their 90s, which means that the plan will need to include growth that will stand up to future inflation.

Three stocks that have a dividend yield greater than today's paltry interest rates on savings accounts or government bonds and can protect your nest egg from the erosion of inflation are Prologis (NYSE:PLD), STORE Capital (NYSE:STOR), and AbbVie (NYSE:ABBV). Each of these businesses has a growth component, a strong history of dividend increases that exceed inflation, and the potential for capital gains when investors are holding shares for the long term. 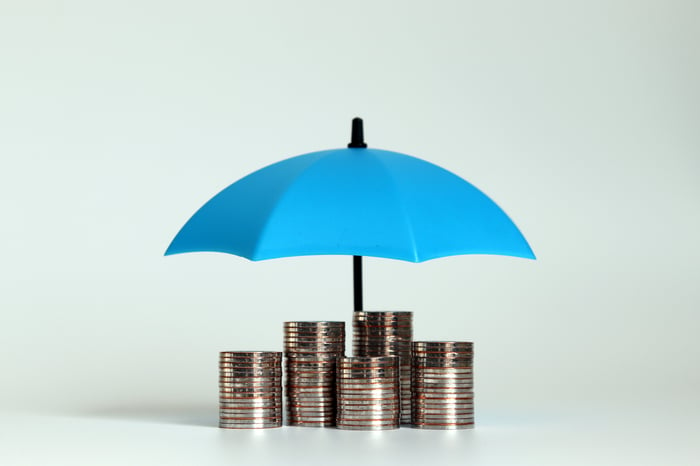 One trend that shows no sign of slowing down is the growth of e-commerce. Not only are marketplaces like Amazon.com thriving, but many businesses in retail and manufacturing are finding it essential to have the ability to ship products directly to consumers in a matter of a couple of days or even less. This has created a huge demand for warehouses close to urban centers to support the broad selection of goods and delivery times consumers expect.

Enter Prologis, a real estate investment trust (REIT) that's the world leader in logistics real estate. The company owns warehouses and distribution centers that it rents to retailers, manufacturing companies, logistics companies, and the U.S. Government. Prologis has been doing this for 36 years and has huge scale: It estimates the economic value of goods passing through its distribution centers in 19 countries every year to be $1.5 trillion, or 2% of the world's gross domestic product. Its biggest customers are Amazon, Home Depot, FedEx, and Walmart, but Prologis is well diversified, and those heavy hitters contribute only 14.5% of its rental income.

What makes Prologis a good dividend stock for retirees is the growth component that the company brings to the portfolio. In the most recent quarter, core funds from operations (FFO), the equivalent of earnings for a REIT, grew 8.5% to $0.77 per share, and the company raised its guidance for full-year core FFO to $3.26 to $3.30, or an increase of 8.3% at the midpoint.

The current dividend yield for Prologis isn't overwhelming at 2.5%, but the potential for growth makes up for that. The company raised its dividend by 4% this year and the payout has grown 26% over the last three years. Share-price appreciation has been a big part of the total return, as well. Shares are up 50% this year and 71% over the last three years.

With the e-commerce boom putting pressure on bricks-and mortar retail, you might think that a REIT that rents space to consumer-oriented businesses would not be a great opportunity. STORE Capital specializes in commercial real estate and counters that conventional wisdom with some particular characteristics are allowing it to thrive in this environment.

The "STORE" in the company's name is actually an acronym standing for "single tenant operational real estate." STORE Capital focuses on properties rented by single tenants that have a thriving and profitable operation at that particular location. STORE requires its tenants to submit financial statements to confirm that the location is profitable. Large chains tend to close their least profitable stores in times of financial stress, so STORE's insistence that its tenants have a thriving, profitable business at that location helps keep occupancy high and its cost of capital low.

The company also focuses on middle-market tenants in the service sector such as restaurants, early childhood education centers, health clubs, and movie theaters. These are businesses that aren't threatened by the e-commerce trend.

STORE continuously raises new capital through an "at the market" equity distribution -- meaning it's constantly diluting its shares by issuing new stock that it uses for acquiring new properties. But given that the company achieves net investment returns after operating costs of about 12%, the model is working to give shareholders compounding growth over time.

In the first six months of 2019, Store increased revenue 25%, thanks to 24% growth of its real estate portfolio. Adjusted funds from operations (AFFO) grew 25%, which translated to 10% growth in AFFO per share. The strength of the business model has attracted the attention of Warren Buffett, who owns an 8.2% stake in STORE Capital, the only REIT in Berkshire Hathaway's portfolio.

STORE Capital yields 3.7%, having just raised the dividend by 6% earlier this month. The dividend has risen 21% over the last three years, and shares have appreciated 44% in that time.

Investors frequently turn to the stocks of major drug manufacturers to get a reliable yield and some protection against a downturn in the economy. One quality company that's a bargain now and a good fit for retirement portfolios is AbbVie.

AbbVie stock has been under pressure since early 2018, and the biggest issue is biosimilar competition for immunology drug Humira, the world's top-selling drug and the source of 59% of the company's sales. Humira won't be up against biosimilars in the U.S. until 2023 but has direct competition in Europe today, which is taking a bite out of revenue. Last quarter, Humira sales in the U.S. grew 7.7%, but losses internationally meant worldwide sales slumped 3.9% in constant currency.

Then in June, AbbVie announced a plan to acquire Botox maker Allergan for $63 billion, and the stock took another tumble. Investors clearly were not impressed with the high price for a company that had growth challenges of its own.

Putting it simply, the market overreacted to both issues. The Allergan deal reduces dependence on Humira, diversifies the company into new therapeutic areas, and will add between 10% and 20% to earnings per share. As far as Humira is concerned, it still has three years of growth ahead in the U.S. market, and AbbVie is working on next-generation immunology drugs that should pick up some of the losses from the competition.

The stock is beginning to recover and is now only 4% below the share price the day before the Allergan announcement. But it's still undervalued, with a yield of 5.8%. Analysts expect earnings growth next year of 9%, and shares sell for 7.7 times the consensus earnings estimate for 2020. The dividend was hiked 11% this year and has increased a whopping 88% over the last three years.

AbbVie won't have the same level of growth that the other two picks will have, but the market is giving us an opportunity for a generous yield along with some capital gains as investors come to appreciate the strengths of the new, combined company, which include modest growth in the long term.