Despite mixed results, a strong bottom-line beat was enough to send the stock higher. Here are the details investors need to know.

Shares of Thor Industries ( THO -3.42% ), a leading manufacturer of recreational vehicles (RVs), went up over 21% Monday morning after the company released fourth-quarter results that beat estimates on the bottom line.

While Thor Industries beat on the bottom line, and its stock price is soaring during early morning trading, its top line checked in shy of estimates: Total sales came in at $2.31 billion, just short of analysts' estimates calling for $2.33 billion. Breaking down the top line miss further, North American Towable RV sales dropped 18% to $1.16 billion, below estimates of $1.21 billion, while North American motorized RV sales declined 8% to $387.4 million, beating estimates of $357.2 million. Thor's recent acquisition of EHG, one of Europe's largest RV manufacturers, also disappointed with sales at just under $720 million compared to estimates calling for $767 million. Net income landed at $92.1 million, or $1.67 per share, well ahead of analysts' estimates of $1.47 per share. 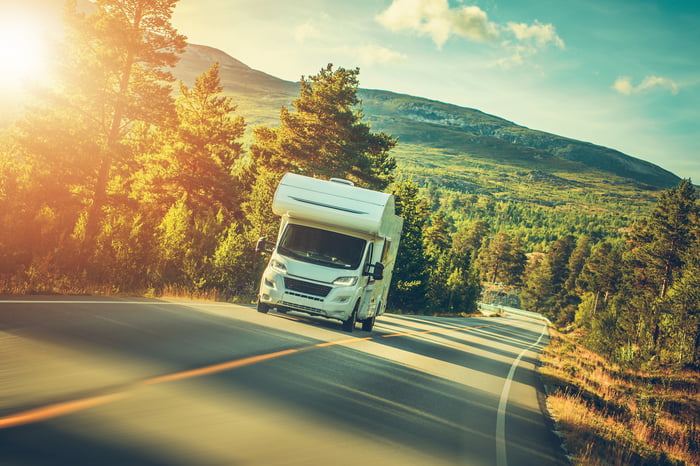 "We are encouraged by the improvement in the North American RV Towables segment in the fourth quarter, as we saw our flexible business model and the benefits of our variable cost structure drive improvement in margins for the quarter," said Bob Martin, Thor president and CEO, in a press release. "Fiscal 2019 was a year of significant accomplishments amid challenging industry conditions."

As Thor investors put fiscal 2019 to rest, 2020 looks to be a mixed bag as challenges remain -- which is simply part of investing in consumer discretionary stocks -- during the first half of the year. However, management remains optimistic. It expects better sales growth for the full year, although it will be slower initially, with dealers adjusting their inventory lower. It also noted a number of RV events, shows, and an open house event.

Despite an expected slower start to fiscal 2020, if Thor can continue to improve gross margins -- which advanced 140 basis points to 14.4% during the fourth quarter as compared to the prior year -- its strong bottom-line results could keep investors interested.