Please ensure Javascript is enabled for purposes of website accessibility
Log In Help Join The Motley Fool
Free Article Join Over 1 Million Premium Members And Get More In-Depth Stock Guidance and Research
By Daniel Sparks - Oct 10, 2019 at 7:21AM

Now the analyst rates the stock a "hold." Here's why.

Shares of Chipotle Mexcican Grill (CMG 1.70%) have been on an absolute tear recently. The stock is up 90% year to date as the company's financial results indicate that everything is going right for the company. From soaring digital sales to successful new menu items, the fast-casual burrito company is executing well -- and customers are responding.

Analysts are responding, too. Recently, analysts have been increasing their price targets for the stock. Furthermore, now a bear is giving up his underperform rating for shares (via Barron's), leaving just three sell ratings out of a total of 26 ratings on the stock.

Here's what's behind Chipotle's momentum -- and why this analyst now thinks investors should hold their shares of the burrito chain. 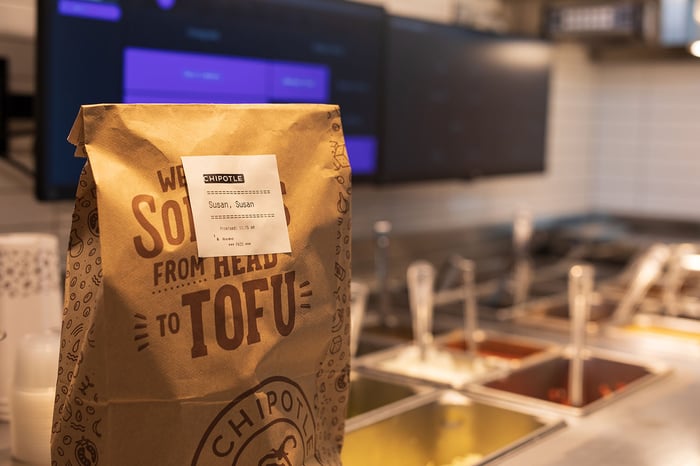 Upgraded from "underperform" to "hold"

Gordon Haskett analyst Jeff Farmer said in a note this week that he is increasing his same-store sales growth forecasts for the remainder of 2019 and the full year of 2020. His increased optimism for the key retail metric reflects his "expectation for continued digital sales momentum and Chipotle keeping its customers engaged (and average check moving higher) with impactful new food news," the analyst explained.

Farmer noted that his former bear thesis was predicated on a forecast for a more meaningful deceleration in same-store sales growth beginning toward the end of Q3. But a revised estimate for 9.5% and 7.5% same-store sales growth in the third and fourth quarter of 2019, respectively, suggests the analyst believes Chipotle's execution and innovations will continue to pay off nicely.

Chipotle has fully recovered from its food safety woes several years ago. Since Brian Niccol took over as CEO earlier last year, the company has successfully executed on digital strategies, including online marketing, digital orders, and a mobile rewards program. In addition, the company has seen success with new menu items like its "Lifestyle Bowls" and carne asada.

The strength of Chipotle's business is clear in its operating results. Revenue in its second quarter was up 13.2% year over year, fueled by a 10% increase in same-store sales and 19 new net store openings. Adjusted earnings per share for the period were $3.99, up from $2.87 in the same period last year.

Furthermore, digital sales were up 99% year over year in Q2 and now account for 18% of revenue.

Impressively, the company has seen six quarters in a row of accelerating same-store sales growth.

While the stock seems to be priced for perfection, Farmer may be on to something. For investors lucky enough to have owned the stock during its recent run-up, selling shares at this point makes little sense, given Chipotle's notable execution and undeniable momentum.