Please ensure Javascript is enabled for purposes of website accessibility
Free Article Join Over 1 Million Premium Members And Get More In-Depth Stock Guidance and Research
By Rebecca Shore - Oct 31, 2019 at 11:12AM

Tesla reported strong third-quarter results, but investors may note warning signs, including a significant drop in U.S. sales and questions about the sustainability of its growth.

Last week, Tesla ( TSLA -6.42% ) reported a profit for the third quarter on Oct. 23, surprising analysts. The electric car maker reported adjusted earnings per share of $1.86, compared to the second-quarter loss of $1.12 per share.

Co-founder and CEO Elon Musk tweeted his take on the results:

To understand Musk's spin, let's dig a bit deeper into those bullets. 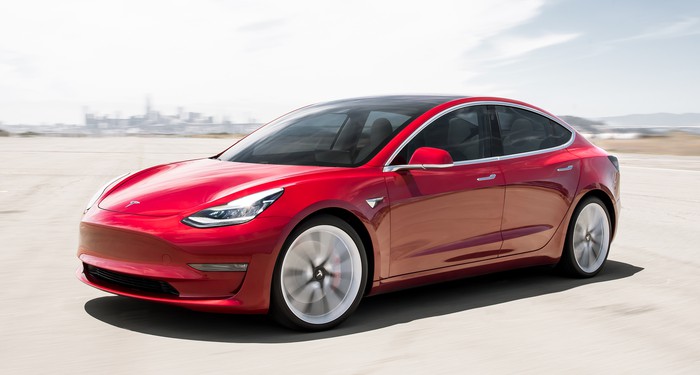 1. Shanghai Giga ahead of schedule

Tesla says its new factory in Shanghai has already begun trial production runs. The factory was built in 10 months, and the company claims it was significantly less expensive to build than Tesla's Model 3 production system in the U.S.

2. Model Y ahead of schedule

The company also said it's ahead of schedule on its long-anticipated Model Y crossover. The Model Y was originally set to begin production in late 2020, but the company reports that the timeline has been moved up to summer 2020.

Musk acknowledged that its solar business had been neglected as the company focused on making its Model 3 vehicle work for the sake of the company's health. But now that, as Musk says, the Model 3 is "a relatively smooth operation," the company has redirected resources toward solar storage. Tesla said installations increased for the first time in a year. The 43 megawatts of solar deployed were a 48% jump from the previous quarter.

At the same time, the company generated positive free cash flow by, according to Tesla's press release, "removing substantial cost from our business."

Despite all this encouraging news, some signs indicate it could be time to pump the brakes. Reuters reported Tesla's third-quarter revenue in the U.S. fell 39%. That's the first time revenue in the U.S. dipped in more than two years. Sales in the U.S., which makes up the largest share of Tesla's total revenue, dropped to $3.13 billion from $5.13 billion last year.

A lot rides on whether Tesla's bet on Model Y will pay off. Forbes consumer tech reviewer Brooke Crothers dismissed imminent competition from traditional gas-engine car makers. "The Tesla Model Y will dominate the EV [electric vehicle] crossover category because it's the most recognized EV brand -- certainly in the U.S," said Crothers. And the Model Y may drive the company's future success.

Tesla has more than the promise of Model Y going for it. Its price-to-earnings-growth (PEG) ratio is -1.99, indicating that the stock may still be undervalued. And while Musk's characteristic zeal may scare off some investors, the company has started to deliver on his promises. It is meeting its production goals, delivering 97,000 cars in the U.S. in the third quarter,  and it's ahead of schedule on its Shanghai factory and the Model Y.

With its history of innovation and as the U.S. continues to go greener, Tesla is a good bet for a long-term investment.