Please ensure Javascript is enabled for purposes of website accessibility
Free Article Join Over 1 Million Premium Members And Get More In-Depth Stock Guidance and Research
By Keith Speights - Nov 7, 2019 at 6:00AM

Globus Medical ( GMED 0.75% ) has delivered solid results so far in 2019, thanks in large part to the company's products used in spine surgical procedures. This performance led to Globus stock jumping nearly 23% year to date.

The company announced its third-quarter results after the market closed on Wednesday. Globus Medical kept the momentum going with a solid quarter yet again. Here are the highlights from its Q3 update. 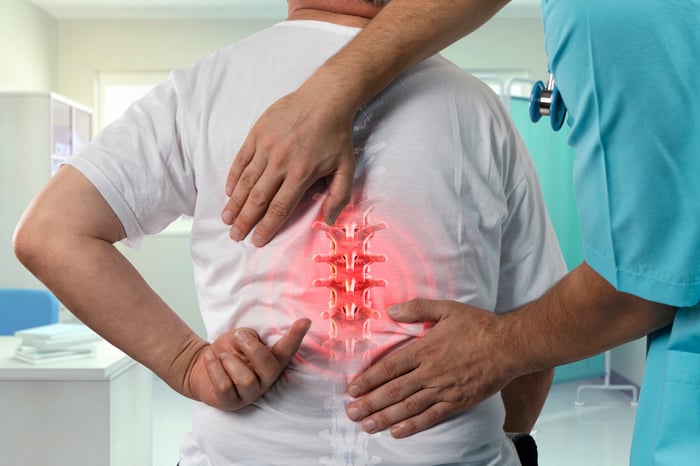 Globus posted adjusted non-GAAP net income in the third quarter of $0.43 per share, a year-over-year increase of 10%. The company's adjusted earnings per share (EPS) also narrowly beat the consensus analysts' estimate of $0.42 per share.

Globus Medical CEO Dave Demski referred to his company's performance in Q3 as "outstanding." The company's musculoskeletal solutions business is its biggest moneymaker, generating nearly 93% of total sales. This unit had another solid quarter, with sales increasing 11.8% year over year to $182.3 million. Demski attributed this success to "competitive recruiting, new product introductions, and implant pull through from ExcelsiusGPS installations." ExcelciusGPS is the company's surgical robot system.

The company's enabling technologies business pulled in $13.9 million in the third quarter. While this was much lower than Globus Medical's musculoskeletal solutions unit, it reflected a 125% jump from sales in the prior-year period.

Demski said that Globus delivered "industry-leading profitability" in the third quarter. The company's earnings growth stemmed primarily from the trickle-down impact of its higher revenue. However, spending increased a little faster than revenue did, with operating expenses rising nearly 17% year over year.

Investing in healthcare stocks like Globus Medical requires looking at the future more than the past. The good news is that Globus' future appears to be a bright one.

Globus Medical expects that revenue for full-year 2019 will be between $775 million to $783 million, up from its previous guidance of $770 million to $775 million. The company anticipates non-GAAP EPS of $1.72, in line with Wall Street's full-year estimate.

Investors will also want to keep their eyes on Globus' activity related to its acquisition earlier this year of StelKast, a small maker of total joint arthroplasty systems. This acquisition should boost Globus Medical's robotics business but probably won't have a significant impact until sometime next year.

3 Unstoppable Stocks to Buy and Hold for Years