NVIDIA (NASDAQ:NVDA) designs and manufactures advanced computer graphics processors, chipsets, and multimedia software. Its Tegra processor integrates an entire computer onto a single chip for supercomputing in autonomous cars, drones, and robots as, well as for gaming consoles and mobile gaming. Further, its data center products continue to grow for the company.

The stock has been on a roller coaster this year. The trade war spooked investors several times and growth in artificial intelligence (AI) and machine-learning were responsible for spikes in the stock price on other occasions.

The trade dispute with China has buffeted American technology companies and caused investors to run for the exits. But adaptation is the name of the game, and the best U.S. tech businesses -- like NVIDIA -- are doing just that. And so for NVIDIA, an explosive new growth phase may be just beginning. 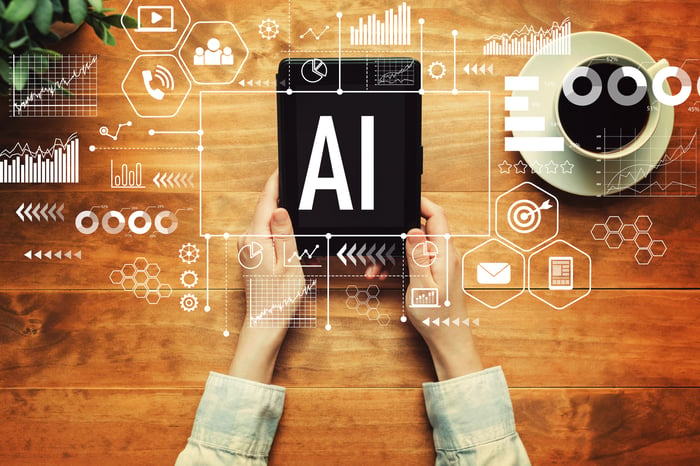 NVIDIA builds its own island in the trade storm

Jensen Huang, the company's CEO, was the keynote speaker at the Mobile World Congress in Los Angeles last month, where he revealed the innovations and partnerships that are helping his company diversify away from China.

He explained how NVIDIA will be at the center of what he called the "smart everything revolution," also known as the Internet of Things (IoT). Data collected via small boxes everywhere -- from traffic lights to communications centers -- will be instantly processed and sent to cloud-based data centers. Everything will be connected, or "smart." The glue holding it all together: NVIDIA's EGX Edge Supercomputing Platform, a cloud-based product merging AI and 5G networks. It allows companies to harness rapidly streaming data for decision-making in everything from production to customer services.

EGX is being used right now at the Walmart (NYSE:WMT) Intelligent Retail Lab in Levittown, New York. It's a fully operating Walmart grocery store experimenting with the ways AI can improve efficiencies and in-store shopping experiences.

The technology automatically alerts associates to carry out important tasks. Product restocking, opening up new checkout lanes, and monitoring product freshness in the meat and produce departments are just a few of the functions streamlining Walmart's operations.

"The opportunity for using automation to improve efficiency in retail is extraordinary," Huang said, referring to the $30 trillion retail market.

But retail applications are just scratching the surface. The technology is already being applied in manufacturing, inspection, distribution -- anywhere data is gathered and decisions are made based upon it. BMW, Proctor & Gamble, and Samsung are among global leaders adopting the cloud-based platform.

NVIDIA's innovation is exciting -- Huang estimates the opportunity can be measured in trillions of dollars per year as this technology improves efficiencies in the global economy.

Pivotal to the EGX platform is the new collaboration with Ericsson (NASDAQ:ERIC) on 5G to build high-performance radio access networks (RANs). Ericsson is a leader in the RAN industry, one of the key building blocks for high-speed wireless networks.

The joint project involves fusing 5G, supercomputing, and AI for a revolutionary communications platform that will someday support trillions of always-on devices.

Ericsson's executive vice president Fredrik Jejdling said, referring to NVIDIA: "As an industry we've, in all honesty, been struggling to find alternatives that are better and higher performance than our current bespoke environment. Our collaboration is figuring out an efficient way of providing that, combining your GPUs with our heritage."

Ericsson is a Swedish company, making the partnership attractive to large telcos seeking the technology while remaining neutral in the trade war.

As a chipmaker, NVIDIA is well positioned in the middle of AI and machine learning. Integrating 5G and AI in new products with applications in practically all areas of life starts a new generation of NVIDIA technology. And doing it independent of China is a genius step, enabling customers and partners to walk the middle road of neutrality.

At 28.7 times forward earnings and 12.7 sales, shares might seem price relative to other technology companies. But for NVIDIA, those numbers may well prove conservative.

Fifteen years ago, Huang created the chips that fueled the emergence of supercomputers, which provided the springboard for AI and made fortunes for many. Now he's at work on another generation of innovative tech products. He has the experience and expertise to lead NVIDIA into the new age of 5G and AI integration.

Investors should understand that volatility is part of investing in chipmakers. After being crushed by the cryptocurrency crash, the stock has rebounded nicely, rising 45% in 2019. Since June, the stock has had a long price run-up as investors set their sights on the future. With robust long term opportunity and technological leadership, NVIDIA stock is a buy.

The stock has performed well in the past, and shares could soar in the coming years, making some millionaires in the process. Could you be one of them?