Shares of Nordstrom (NYSE:JWN) were surging today after the high-end department store chain posted better-than-expected earnings in its third-quarter report. Today's gains also came after the stock fell earlier in the week on disappointing reports from peers including Kohl's.

Nordstrom's results were far from spectacular, as overall sales still fell, but the results showed improvement in some key areas. Net sales, which the company is now using as a proxy for comparable-store sales, fell 2.2%, though sales returned to growth in the off-price Nordstrom Rack segment, rising 1.2%. The trend in the full-line division, which makes up nearly two-thirds of the company's sales, improved from earlier in the year, but still dropped 4.1%. 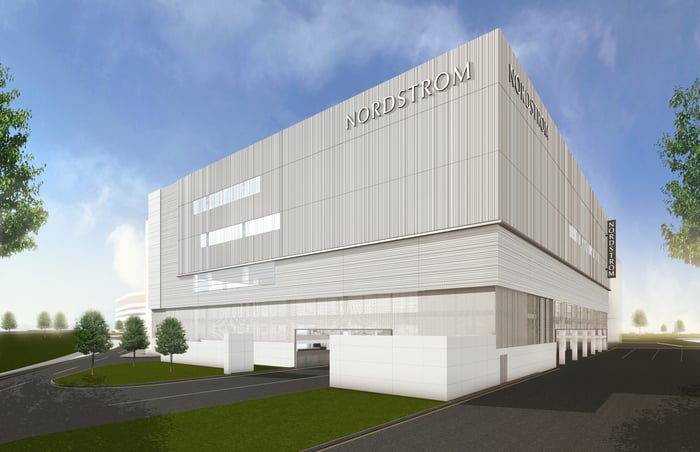 A rendering of the Nordstrom store in Norwalk, Connecticut. Image source: Nordstrom.

Further down the income statement, the company made significant progress. Gross margin increased from 33.3% to 34.3% as the company had fewer markdowns in its off-price business and executed better in its Anniversary Sale. And adjusted earnings per share increased from $0.67 to $0.81, surging past estimates at $0.64, as adjusted net income rose 9%, benefiting from a 10% reduction in shares outstanding since the company has been aggressively buying back stock.

Co-president Erik Nordstrom touted the opening of the company's flagship women's store in New York just a few weeks ago, and said: "Our market strategy is transforming our business model in how we're serving customers. We have a unique mix of assets -- full-price, off-price, stores, and online -- and we are further linking our businesses to serve customers in new and differentiated ways."

Looking ahead, investors were also encouraged by a modest hike in the retailer's full-year earnings guidance. It now expects EPS in a range of $3.30 to $3.50, which is up from a prior range of $3.25 to $3.50. It continues to estimate a 2% decline in net sales for the year.

Overall, the quarter showed that Nordstrom is doing better than many of its department store peers, including Macy's, since it was the only major department store chain to post increasing profits in the quarter. Meanwhile, the opening of the New York store should provide a lift to results over the next year. However, there are still areas for improvement like online sales, which grew just 7% in the quarter, and the full-line segment. Given those forces and the uncertainty around them, the stock's recent volatility is likely to continue.