Find out why these retailers stood out.

Friday was another relatively quiet day on Wall Street as major benchmarks continued to tread water near all-time highs. Market participants seem to be waiting for some major piece of news to lead them either higher or lower, but at least today, they didn't appear to get any clear direction. Yet there were still some pockets of significant strength at the individual stock level that gave investors some holiday cheer. Nordstrom ( JWN -5.38% ), Buckle ( BKE -3.95% ), and Hibbett Sports ( HIBB -0.82% ) were among the top performers. Here's why they did so well.

Shares of Nordstrom jumped nearly 11%, rebounding from recent declines after the upscale department store chain released its latest quarterly numbers. A host of retail peers had posted troubling results in their own quarterly reports, and Nordstrom's 2.2% drop in revenue during Q3 2019 certainly wasn't the figure that investors were hoping to see. Yet earnings per share doubled from year-ago levels, and company Co-President Erik Nordstrom touted the opening of its new flagship New York City store as a key element in its overall strategy. With a mix of high-end and discount stores along with a rising online presence, Nordstrom is doing what it can to remain a leader in a fast-changing retail world. 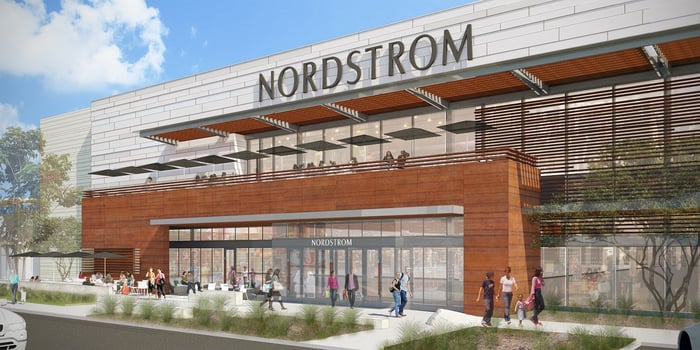 Specialty retailer Buckle saw its stock soar 20% following its release of third-quarter financial results. The company said that revenue climbed 4% from year-ago levels, with a 4.7% rise in comparable-store sales. Buckle reported a modest increase of 5.4% in online sales, and net income jumped 27% year over year. More than other retailers, Buckle has been willing to try things out in an effort to fight the pressures affecting the industry, including moves such as pivoting to lower price points on premium items like jeans. Not all of those efforts will be successful, but investors seem to like the innovative spirit that Buckle has, and solid results going in to the holiday quarter gave shareholders a boost.

Finally, shares of Hibbett Sports gained 15%. The sporting goods retailer reported an impressive 10.7% rise in comparable sales in the third quarter of 2019, playing a key role in pushing overall revenue higher by 27% year over year. Hibbett's acquisition of City Gear has also been instrumental in promoting its growth, and cost-conscious strategic moves helped adjusted net income more than double over the period. With a thriving e-commerce business as well, Hibbett was able to boost its full-year guidance for both earnings per share and same-store sales. That's exactly the sort of strong growth that shareholders want to see going into the holiday shopping season.